A very happy Thursday morning to each of you, it was great to be able to sleep until 6:30 this morning. Just as we were walking to the restaurant for breakfast my son and the IRM Vice-President, Alfred Mupenzi called on WhatApp from Australia to go over some of the Kenya details. He so wanted to be with us this year and it is hard trying to take care of details from so far away but he is doing a great job and I appreciate him. In Kenya Bishop Moses and Chaplain Edward are also working hard on the arrangements there. In addition, here in Uganda Pastor Peace and Pastor Aaron worked hard on the arrangements here. It is a true thing, it takes MANY dedicated, hardworking partners to make these ministry trips work and I do appreciate each one and the effort they put in.

The buffet servers in the restaurant are so nice. I was trying to talk on the phone, hold my plate and spoon some breakfast items onto my plate when all of a sudden one of the servers came up behind me and took my plate, walking along with me, holding it so I could just add what I wanted from the breakfast items. I did not ask her to, she just saw I needed help, how very nice. Beans, sausages, tiny pancakes, black tea and of course my favorite pineapple.

Today we are driving a different vehicle as Aaron left our van to be completely checked out and gone through. He found, I think he said, a gasket cover or something that had a crack in it so they were going to have to put a new one on. It is a very good thing we were not driving this car yesterday when we ran over the terrible roads because we would have high centered and never made it. This one is a Subaru station wagon and so much smaller and lower the ground, everything is crammed in but it does have air conditioning so I am not complaining.

Little did we know you are going to get caught in three big traffic jams today and it was going to take us quite a while to get to the small prison that was on our schedule. We see such interesting sights as we drive through the villages and countryside. 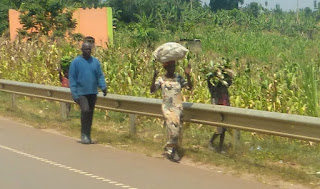 Women carry, children carry and the husband just walks along!

After a 2+ hour drive we arrived at the prison where the O.C. welcomed us, he said he had to leave for another appointment and left us in the care of his staff. But, not before he allowed me to take a picture with him and one of his staff outside against a prison wall. As we got ready to take the picture I told them that because I was 75, I was mama to everyone, so I could give him a hug for the photo. He laughed and put his arm around me as did the guard. Then he asked Aaron to take a picture of us with his phone.

Quite some time ago, I had been to this prison of 127 (with guards) so I asked them how many had heard me speak before and three of them said they had. The men were seated in a covered porch of the building and along the side of the building in the shade and a woman guard brought in six women who also said in the shade on the right-hand side. There really was not shade for me to stand in but occasionally as I was preaching I stepped over where the women were and got a moment or two of shade. It is so hard to believe it is still the Christmas/New Year’s season here as it is so hot and I am used to seeing rain and snow at this time of year.

I never get tired of seeing them respond to invitations for salvation, forgiveness or seeing them apologize to each other like they did today. I am truly blessed by God to be doing what I am doing at my age and with my health, I am having the best time of my life.

Three of the young men and one of the women gave a testimony about how God worked in my life today while we were there and it was fun to see the other prisoners laugh as I gave each prisoner a hug as he finished sharing.

Since we only had one crusade to do today and it was 1 o’clock, it was time to head back to the hotel. I had put the pizza from last night’s dinner on the dashboard, or as Pastor Aaron calls it the African microwave, so it was nice and hot for lunch. Putting it there and having a ready was one of my better ideas.

Once we arrived back at the hotel Aaron left to go check on our van and see if it will be available today or we will have to wait until tomorrow to pick it up. When I asked him why he did not just call them on the phone he said that he wanted to actually see if they were doing the work.

I am glad I have time to get this blog done this afternoon, which hopefully means, I will be able to go to bed early this evening.

God is certainly answering your prayers for us. Although it rained again last night it did not rain today during our crusade. Please continue to pray:

Thank you again for your prayers and finical support. I cannot do what I do without God's leading and the partnership you provide.

That none would be lost,
Arlene
Posted by Arlene at 5:15 AM