HAPPY NEW YEAR TO EACH OF YOU from Kakika, Uganda.

I enjoyed a long soak in the tub last night before going to bed as I listened to the partying going on in the next building. I got a fair amount of sleep, despite the noise, the fireworks were more than one.

It was an early morning for us so we requested before we went to bed that our breakfast would be ready at 7 o’clock. They brought us pineapple juice, fresh pineapple (You can see I am a happy camper) the best sausages I have had so far since I have been here, Spanish omelet and African tea. Aaron and I also had them make us a double order of pancakes. We found yesterday that these were the best tasting pancakes that we have had although they were almost paper thin and folded into quarters. We knew that after the prison today we would be heading for Masaka and we did not have any fresh bread for PB&J sandwiches so we thought these wonderful little tastings pancakes would work just perfectly. And they did, they were delicious.

We packed the van as soon as we ate breakfast and we were off to the local prison which was just a few minutes away. When we arrived, we found that the OC was there but one of the other staff greeted us. It is interesting how differently each prison is run. Although we arrived at 8 o’clock by the time they had the 649 men assembled and told us it was time for us to go in it was 9 o’clock.

There they were, almost all seated on the ground in a fairly cramped space. I had a good amount of space to walk back and forth in front of them as I spoke. To the left of where the men were seated they were cooking and, at times, the smoke filled the air, burning my eyes and stinging my nostrils. I could not help but think that the men must struggle with this every day. The sun was going to be hot today so I was glad it was early in the day and I was covered fairly well.

All those faces watching me so intensely with laughter and smiles appearing when I told them that I was 75 years old. That information always seems to get the same response. We had not been given any directive as to how much time they were going to allow us to do our crusade that I proceeded as quickly as I could while still maintaining all the content.

Again, I had the privilege of watching the Holy Spirit speak into their hearts as they receive Christ as their Savior, prayed for forgiveness and then humbled themselves went to the person that had an offense with and apologized. What a wonderful way to start the New Year by making three good choices, a powerful thing for men who are known for making poor choices.

Then there were those who wanted to give a testimony concerning how God had spoken to their hearts this morning:

As each of the men finished speaking I gave them a hug and said, “God bless you.” The inmates were not quite sure how to take my hugging the three prisoners but when I explained that because I am 75 I am mama to everyone, they laughed. I just wondered when the last time was that those three men had been hugged in kindness.

At that point, the guard, who was stationed with us, requested that the inmates thank us by singing a song or two for us. He said, “When you come and speak to the inmates you make our work easier.”

As we got to the outer gate we met a man in street clothes coming in. He introduced himself as the OC and asked us to please come to his office. I gave him the small bag with two donated men’s ties inside and he immediately put one on.

For you men out there that are reading this, please donate your gently used men’s ties, I can use them.

While Aaron ran an errand, I chatted with the OC. He asked me why not everyone on the government letter was with us today so I explained and told him that my adopted son, Alfred, was in Australia and he had a problem with his passport. I told him Alfred was Rwandan but had grown up in a Ugandan refugee camp and he said, “Well, I am Uganda but I grew up in a Rwandan refugee camp.”

It was just 11 o’clock and we were on our way to Masaka where we will visit the men’s and women’s prison tomorrow. During the drive, we observed many herds of cattle with young boys herding them alongside the road. Aaron said to look for Zebra but we never saw any. After about a three-hour drive it was time for us to find a new hotel and at one hotel we checked with I observed this beautiful tiny bird not much bigger than a hummingbird. 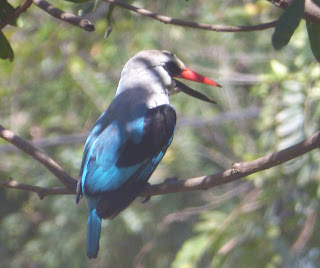 With the zoom lens on my tiny camera, I was able to captured this photo of him.

I was once again blessed with a room with a bathtub. I am glad we are staying here for two nights, I will enjoy the tub. I am thankful that my room is at the back of the hotel where it is quiet.
The restaurant does not offer much in the way of food for dinner. Aaron says it will be, “Local foods.” He mentioned chicken stew, of which I am not a fan so I told him I would have fillet of fish and chips, there is never a doubt of getting chips.

Pastor Aaron found out that the cracked windshield on the van will cost IRM $400 to replace and that the owner of the van carries no insurance to cover the van if any further damage occurs. Please pray that as we finish ministry here and travel on to Kenya that no further damage will occur.

Your continued prayers for open hearts for the gospel and a fresh anointing of the Holy Spirit on us, would be appreciated.
That none would be lost,
Arlene
Posted by Arlene at 6:21 AM