We started the morning with a brief team meeting of sorts will we were having breakfast. I forgot to tell you yesterday, at the place where we stayed, served an interesting juice for breakfast, avocado! I just could not bring myself to try but I watched Edward try it by adding some sugar. Today I had African tea, sausage, and to pancakes(actually there are more like crepes)with a tiny bit of orange marmalade.

Then we were off to a small men's prison with Bishop Moses's phone GPS saying we would be there in about an hour. Well, that would have been true if we been on a normal paved road but when you are traveling dirt roads that all of a sudden do not exist except for washed out gullies and potholes driving is can be quite slow. Little did we know that it was only the beginning of similar roads, only worse, later in the day as we traveled to Kisii, a town of about one half a million according to Moses.

The staff member and welcomed us at the prison stated that there were no women guards there as the only one had been transferred. I found that actually quite unusual as at even maximum-security men's prisons there are women.We were told that the O.C.s wife was ill and although he knew we were coming he was not able to be there. There were about five local chaplains there to meet us and within a few minutes we could hear the men singing. I did not realize until later, when Moses and I were talking, that the men there did not speak Swahili which is what Aaron and Edward were going to be translating into, they actually spoke their local language Luo.

The prisoners were seated against a very long building with a bit of overhang for shade. Moses for an opener and Aaron, Edward and I would be preaching from the edge of the field in the sun. I was thankful for a brief period that there was a bit of cloud cover in the beginning of the crusade. When the local chaplain was doing introductions he said that there were Catholics, Protestants and Muslims there and I observed a number of them scattered throughout the other inmates.

Moses had to leave for a bit for a meeting but the rest of us continued the crusade and the responses were the same as we have observed in other prisons as the Holy Spirit pierced the spirit of darkness with the truth of the Gospel of Jesus Christ as most prayed to receive Christ as Savior, including many Muslims.
There were also responses for forgiving and apologizing and there were those who gave a testimony:
When we finished I talked about the few supplies we had brought, Bibles, Discipleship booklets and soap and toilet tissue. Imagine my surprise when I was told that there were NO bibles in that prison of 100+ men. OH MY GOODNESS!!!!! 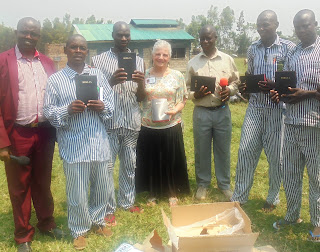 Pastor inmates receive the first bibles to ever be in this prison.
As we finished the other chaplains brought sodas and cookie, what a nice gesture. As two inmates carried our speaker and other things to the van I tucked a package of cookies in each of their shirt pockets. And then I offered each of the chaplains to choose one of the donated ties for themselves.

We were then off to Kisii a long hot drive over almost impassable roads at times. It took some time before any part of the journey was smooth enough for me to make everyone a PB&J or honey sandwich finished off with a package of cookies from the prison chaplains.

Once we arrived in Kisii we waited for the local prison chaplain to meet us and take us to a hotel. We thought we had found one and took our suitcases inside only to find out they raised the prices from  what they quoted Aaron so we loaded up and drove a short distance to another hotel. Our funds are limited so "things" have to fit in our budget.

The menus was quite brief so I chose fish and chips and Aaron was going to ask if they could make some pineapple coleslaw.It's 6:35 and dinner was ordered for 7, I hope it is ready then as I am so tired I just want to eat, shower and hit the sheets!

We have two prison crusade scheduled for tomorrow. Please continue to pray, you know the list. Your prayers ARE being answered in a powerful way, THANK YOU.


That none would be lost,
Arlene
Posted by Arlene at 7:42 AM