Thankful for a new day, a day to worship the Savior.

Yesterday was a long day for Pastor Aaron. He stayed at the shop with the van as they tried to repair the radiator but ended up leaving the van and taking a bike ride back to the hotel here at 11PM. The restaurant was closed and I had gone to sleep and he did not want to knock on my door (I have the lunch box with bread and PP&J) so he went to bed without dinner. And he wasn't even a bad boy! Please see the humor in that remark. He left early this morning to pick the van up and although he missed breakfast I had the restaurant package something for him that he can eat on the way to the church.

I asked then to take a Spanish omelette  and put it between two pieces of bread for a sandwich and a add a banana but the girl said she knew he did not get dinner so she fixed .....

2 take away containers with a sandwich each and added sausages, fried plantains and made a "basket of tin foil" that contained 2 bananas.

Pastor  Peace made arrangements to take us to a church for a crusade this morning. The pastor and his  wife were gone but another woman pastor greeted us.

Usually for me , crusades in churches reveal a unique kind of hardness to the Gospel due to the religious head knowledge they have coupled with their personal good works. We had prayed that the Holy Spirit would open their hearts to the truth of the Gospel today and so he did.

Many responded to the Gospel, forgiveness and some apologized.

After the service as we were waiting for the lunch that they provided for us they brought one of the women from the service to me. She began hysterically crying and knelt in front of me then fell over on her side. I pulled her back up in a sitting position as Aaron was interpreting her words for me. She told me about a sister who had told untrue things to her mother and the mother refused to have anything to do with her. Then when the mother was dying she still would not talk to her, her heart was so broken. She said she decided then to never forgiver her mother or her sister.
One the way to church today she saw her sister and although her sister was Catholic she agreed to come to church with her and there I am talking about forgiveness. When I gave the "Forgiveness" invitation she was the first one standing to forgive her mother and then she told her sister she forgave her.
The object lesson we do about forgiving even though someone is dead is a powerful one from the Holy spirit. I told her she needed to continue speaking forgiveness over her mother and sister if Satan kept bringing it up in her thinking, if she wanted to have God's peace in her heart and remain free. I prayed over her and by the time she left her sobbing had quit. 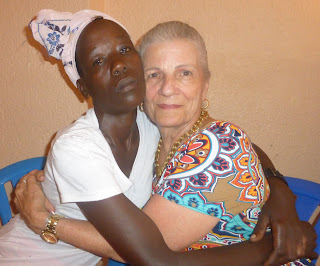 Another child of God set free by choosing to forgive.

Two of the lovely women provided a very nice lunch for us. Mashed mitoki, chicken, white rice, potatoes and a rice seasoned with a sauce that was out of this world. They had a separate pan of it so you could add more. I would say it was one of the best tasting sauces that I have had since I have been coming to Africa.

We left Pastor Peace off at her home and made the 1 1/2 hour journey back to our hotel.
Tomorrow, we do two prison crusades as we head towards Jinja. so we will leave early in the morning. The van and air conditioning appear to be running correctly, praise Jesus!

Your continued prayers and encouraging comment are so appreciated.