I am now in Kampala for a few days until we head to Kenya. It will be nice to not be living out of my suitcase that can actually hang my clothes up.

We had the van packed by 7:30 and sitting down to a breakfast of juice, pineapple, beans, fried matoki and potatoes. Aaron and I both saved our sausage, banana and bread for a PB&J sandwich for lunch. It is important for us to carry a lunchbox because we do not have time to go to a restaurant for lunch and we never know how long it take for us to get back to the hotel. So having a snack is a good thing and I got pretty good at making PB&J sandwiches on my lap as were traveling down the road.

Aaron thought it would take about two hours to get to Katali where the prison was but it only took us about an hour and 15 minutes. They do have a new expressway that is actually going to be a toll road that is very nice but as of yet they are not collecting tolls. Aaron uses his phone as a GPS to try to find the locations of some prisons and at times he also uses the local motorbike guy.

But today he is GPS took us on a around about, almost unsurpassable, deeply washed out, very narrow road or should I say path. There were times I was almost sure that we just were not going to make it and be stuck there, high centered, like when we got behind a garbage truck and there was no way around. We had to wait until they finish loading garbage and moved over a bit so we could go around. Finally found a man that was walking who said that he would show us the way to the prison. That was ever so nice of him. Aaron says the GPS lady has a problem!

The Deputy OC welcomed us because the OC was not available. They quickly got the 130 men assembled quickly and we got our things set up. There were no women at this prison. It was nice that all of us were under the shade of a couple of trees there. Two of the women guards came and sat at the back of the men and three men guards sat over on the right-hand side. The deputy OC sat in the doorway of the entrance building and at one point, I noticed a tall thin officer had brought a chair and was sitting a distance away over on the left-hand side. I assume perhaps it was the OC as I was told later that he had come in and gone.

It is interesting as I was speaking and looking into the eyes of the men and watching either how attentive they are listening or looking else where that in fact they are all listening very intently. Most of them never take their eyes off of me or Aaron when he is speaking. Sometimes I am not sure that he is saying exactly what I said because of the length of the time he talks. It does not matter the point is conveyed, the men enjoy it and the responses were positive. It never gets old to me watching them respond to the Savior’s call to repent or to forgive or to apologize.
The men made good choices for themselves today and three gave a testimony.

Sometimes, believe it or not, I am left without words as I watch how the Holy Spirit speaks into the heart of those he is called me to share the gospel with.

For whatever reason last night I did not sleep well so on the way back to Kampala I fell asleep and was of no company at all for Pastor Aaron we ate our sausages from breakfast and had a cookie but he had to wait for his peanut butter sandwich until we got back to the hotel. He is making another trip over to the rental place to see about getting us a better van to take to Kenya.

Just like yesterday, as I am writing this blog, the heavy pounding rain has started. 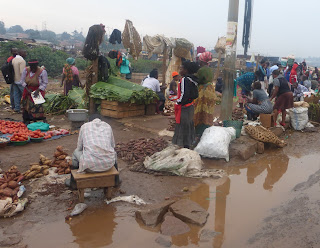 It is needed  for sure but it makes a mess for the vendors along the road who are trying to make a living.

He told me to order dinner for 7 o’clock and that he wanted a hamburger and fries, which are actually pretty good here at this restaurant as is their pizza which I think I will have along with some pineapple coleslaw. The pizza is huge so I will save the balance for Aaron and I do have lunch tomorrow. Wrapped in tinfoil it heats well on top of the dashboard.

Aaron mentioned today how dangerous that the roundabouts here are. Although we were hit a number of years ago God has kept us safe in our travels this trip although we have had some, “yikes” moments.

We value your prayer covering, please continue, we see your prayers being answered every day.

That none would be lost,
Arlene