A lot of planning went into today and I can tell you I was excited about my first day of prison ministry here in Kenya. And of course that excitement affected my sleep as I was up a number of times during the night and finally at 5 o'clock that was the end of my sleeping.

The people here were we are staying are so very nice. I met Gladys, whose husband is a pastor, and she tried to do all she could to get me on the Internet last night by even supplying me with a modem. The lady that sold Aaron what he needed for my computer was actually only for a phone so I could not get my computer online with my own Wi-Fi. Because of my hip injury and the disc that is out in my back we chose to take some rooms at the far side of the complex instead of taking rooms where I had to walk upstairs. But I have a feeling that the rooms we chose are not used often as a light in the bathroom was so faint it was nonexistent, and at one point, n the middle of the night, there was no water in to flush the toilet. Then I got so cold that I got up and put some cloths on and went to bed dressed. Aaron had an issue in his room too so I spoke to the Receptionist before we left for the prison and I hoped some issues could be resolved before we returned from the prisons.

We had breakfast and then waited for Bishop Moses to arrive to show us the way to the prison. It actually was not too far out of town and when we arrived we met with four of the pastors who work at the prison, godly men with big broad smiles welcomed me. We were invited to their office to have breakfast with them as they provided hard-boiled eggs, hot chocolate and bread and jelly. According to Bishop Moses is a part of the culture to eat before starting ministry. I felt bad because Aaron and I had eaten a big breakfast so I explained and just had a cup of hot chocolate. I told them if I ate another breakfast I would not be able to preach I would be sleepy and want to take a nap to which they all laughed. 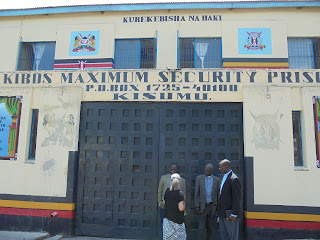 I must must admit I really like some of the O.C.'s that I have met and so it was with both of the ones I met today. After taking photos we were off to where the prisoners had gathered. While the men were getting everything set up I went out and begin to shake hands with the prisoners and tell them, "Good morning," or when I could remember, "Jombo (?)" meaning how are you. It seems to break the ice with the prisoners when I do that.

At one point during the crusade the staff person for the O.C. appeared with an iPad and begin videoing me. Of course the focus then of the prisoners went to her instead of what the Holy Spirit was doing their hearts. So I stopped and let her finish before I continued. Very often the O.C.'s will send someone to take photos but videos are a very different thing. I certainly would not want them appearing on YouTube or anywhere else on the Internet.

We were blessed to watch the Holy Spirit for the inmates as they responded each of the three invitations. Then there were those that gave a testimony, I chose this one to share:

When we finished I thought we were going to the next prison but I was informed that the pastors had arranged for us to have lunch. Goodness another treat, something special instead of our usual PB&J's sandwich. I was concerned as time is fleeting and we had to be finished by 4 o'clock but the pastors all assured me that they would eat quickly. We return to their office and two ladies appeared with a huge variety of delicious food. One very thick white food that I cannot remember the name of that reminds me visually a very thick mashed potatoes but really does not have a taste of its own, rice, goat stew, fish, a cooked cabbage and vegetable mixture and mangoes for dessert. What a feast.

Then it was off to the second prison in the same compound where we were introduced to the O.C. in that section. I cannot tell you how much fun I have pushing the, "I am 75 so I am mama to everyone," and that way I get to put my arm around these nice handsome men and give them a hug while we have our photo taken. Nothing foolish about me.

The most all of them had a chair to sit in which was unusual although a few were standing around the edges. Today they prove although they are known as men made wrong choices they could make good choices for their life in responding to the three invitations. Then there were those one to give their testimony:

I told him that no other family may have come to visit him but mama from America came to visit him.
We finished and when we all arrived at the van outside we formed a circle and thanked God for what we had just watched the Holy Spirit do in the hearts of the prisoners.

When we arrived back at the hotel Gladys greeted us and when she found out there had been a problem with our rooms she said she was moving us to the main building if I could handle some stairs. I said I could, so she took me up one flight of stairs and opened the door to a very spacious room. Yes, you got it, another suite, this time with a beautiful purple trimmed mosquito  and the room had a veranda that overlooks the street vendors outside. Now if I had time it would be a great place to have morning tea or in the evening, a cup of spiced African tea. Aaron and Moses's rooms are next-door.

After getting our rooms changed the guys headed into town to fix what needed to be fixed so that my Wi-Fi would work not just on my phone but also for my computer. Leaving me here to write this post. I told them that if they were not backed by seven I was gonna go down and eat without them. I needed to get this posted, eat, shower and get to bed early for I have two prison crusades to preach tomorrow.


That none would be lost,
Arlene
Posted by Arlene at 9:39 AM