It was a beautiful morning here and they told us breakfast was open at 6 but I arrived at 7 and the "omelette lady" did not set up in the restaurant until almost 7:30. They make the individually as you watch. Not a big deal but on days when we must drive far we would need to leave by that time. I could not find much that took my fancy to eat as all the hot items were local foods most of which don't meet my morning, appetite like peas mixed with ? in a tomato mixture, ect., plain spaghetti, hard boiled eggs, beet juice and papaya juice. Corn flakes with HOT milk only (only hot milk is offered with cereal) and fruit today was watermelon (flavorless) and papaya. I poured a cup of spiced African tea and asked for bacon (unusual to be offered) and a Spanish omelette made with cheese (they don't add cheese to their omelettes) as soon as the lady got ready and they brought the cheese but she made about 6 omelettes for other people here and it appeared she forgot mine so after about 20 min. I ordered again. All that to say, I had a nice breakfast with my tea, an omelette, bacon and wheat toast.

Last night I met three American ladies that are here with 7 electric sewing machines and lots of fabric for cloth backpacks, ect.. They said they are going to be teaching a group in sewing school uniforms and other things.

We were scheduled to do two prison crusades today but it got changed to only one so Aaron and Moses went into town to exchange more IRM money into shillings. I can tell that our ministry in Africa will be over soon as our funds are dwindling. In the absence of heading out to a prison and the guys gone to town I did something this morning I have never done, I took a nap.

The drive to the small prison of 77 was not long but when we arrived the O.C. said we were late and were to have arrived in the morning and the Chaplin said we were to be at a women's prison the afternoon but we could go there tomorrow. The O.C. said because they were so out of the way that they are often forgotten and they were blessed that we came there. He was a very tall man and every bit in authority.

The inmates were clustered around and under a tree for shade and Aaron and I had a bit of shade to preach from. The responses were evidence of the Holy Spirit's work and all the testimonies centered on receiving the free gift of salvation and on what they learned about the importance of forgiveness. I was very pleased so many of the guards stayed and listened and responded.

Then we were taken to the O.C.'s office for lunch, a special treat as most times that does not happen. 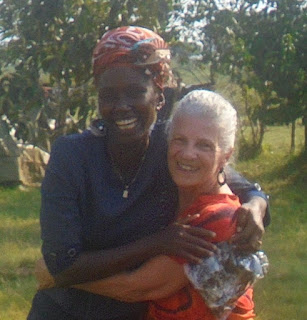 I gave the lady that fixed our lunch a donated scarf which made her very happy.

We talked about driving the few miles to the boarder of Tanzania but decided it was too late in the day. So we drove back to our hotel dropping off the chaplain who had ridden with us. Chaplin Edward had arrived from off-loading the bibles, booklets and supplies.

Last night I read this powerful poem by Cosette Marie Conaway, it speaks to the journey Jesus has me on :


So send I you-by grace made strong to triumph
O'er hosts of hell, o'er darkness, death, and sin,
My name to bear, and in that name to conquer-
So send I you, my victory to win.

So send I you-to take to souls in bondage
The word of truth that sets the captive free,
To break the bonds of sin, to loose death's fetters-
So send I you, to bring the lost to me.

So send I you-my strength to know in weakness,
My joy in grief, my perfect peace in pain,
To prove My power, My grace, My promised presence-
So send I you, eternal fruit to gain.

So send I you-to bear My cross with patience,
And then one day with joy to lay it down,
To hear My voice, "well done, My faithful servant-
Come, share My throne, My kingdom, and My crown!"
"As the Father hath sent Me, so send I you."

Please continue to pray for us.
That none would be lost,
Arlene
Posted by Arlene at 7:29 AM