Although today was not an early call I woke up a number of times and finally at about 5:30 I told myself I might as well get up. I noticed on WhatsApp that Alfred had left me a message and wanted to know if everything was going well as he had not heard from me in three days. I sent him a message and said with a busy schedule and the travel followed by writing the blog in the evening that I was just so tired I could not stay up to tell 11 PM to chat with him. When it is 11 PM here it is just 7 AM there when he is starting his day. And although it would be afternoon there I tried to call a number of times and he did not pick up. So, when I walked down for breakfast at 7:30 I sent him another brief message and said that if he got my text and he was free that the team was having breakfast and he could call us because we would be available.

Bishop Moses, Chaplain Edward and Pastor Aaron arrived for breakfast and I told them of my message to Alfred. It was the familiar breakfast today with African tea, Spanish omelette we choose, sausages and wheat toast. The pineapple I had hoped for has been promised for dinner, yea!!!! We were halfway through our breakfast when my phone rang, it was Alfred's so I put him on speakerphone so everyone could hear. So nice it was to start our morning with him.

Then it was off to the prison where we met with the O.C. of the men's side of the prison. I was surprised, and as it was a woman and not a man. I really liked her and she complied when I asked to have my photo taken with her. She told us that she had a meeting in the afternoon would probably be gone when we came back to her side of the prison for the men's crusade.We went back out to the parking area and waited for a bit while the inmates in the small women's prison made everything ready.

There is a huge tree in the parking area and I noticed the most darling little girl all dressed in pink, with pink shoes kind of wandering around. I went close to her and knelt down and extended my hand not wanting to frighten her with my "white" face. She was not sure she wanted me to come close so I went to the van and picked out a crocheted pink and white Before approaching her again and extending the gift. She allowed me to put it on her head and she looked ever so cute.

Then it was time to walk to the women's section and imagine my wonderful surprise to meet the woman O.C. as I had met her before three years ago when I first came here at another prison there she was the Deputy O.C.. So, although this woman's prison was much smaller it is a step up for her. She was pleased I remembered her and allowed me to take a new photo with her.

As we started the crusade I noticed that the O.C. had sent her guards to attend and then she also came. And then Chaplain Gilbert from Migori Prison, where we were yesterday, appeared, he had traveled from there to bring Aaron the shoes he had forgotten at the hotel there.
Salvation decisions were made and when it was time to pray forgiveness over someone else or yourself the O.C. and some of her guards stood and prayed. Then, when it was time to apologize to someone that you had an offense with it was wonderful to watch the staff apologizing to each other and the inmates not only apologized to each other but to the O.C. and the staff. Such evidence of the power of the Holy Spirit's work in their hearts.

Their testimonies:
The mother's with babies received the donated crocheted caps and them I distributed donated scarves. Now, I told the women that the scarves were all different but the bag I held was all triangle scarves, the only bag of those I had and although I had another bag of square ones I prayed as I started handing them out that there would be enough for them to all get triangle ones. And God did the "loaves and fishes " thing, there was exactly the right amount. Another inmate arrived as we were leaving but no one noticed that the scarf she got was different.

I asked the O.C. if we could give the women each a bible of their own since the women were few and here were enough bibles and I was so happy she said yes. It was such a joy to place a copy of God's word into each ladies hands.

Then it was time to go to the men's section and I was ever so pleased they they had a huge metal topped, open sided meeting area, today I would not have to preach in the sun. There were men in uniforms, convicted prisoner and men in street wear, remand prisoners some of which I was told have committed murder. Just as I started, there was a disruption of prisoners leaving to eat, be counted and  ect. so we made the decision to wait until that was done then start again. But Satan knew many would receive Christ so from a room adjacent to where we were, a man came slithering or crawling, whatever you choose to call it, into the doorway making all "kinds of noises". For some moments the focus went to him then the local chaplain went to where he was and he disappeared back into the room.

Hearing those men pray to receive Christ, forgive and then watch them apologize to each other and to a guard that was there was proof that god had the victory there today. 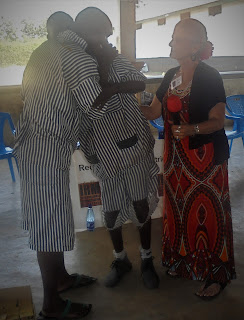 Hugs began & smiles come out when inmates forgive each  other.

Then the chaplain had lead pastors come forward and I was able to present each one with a bible. can you imaging being a pastor and not having a bible of your own!
As we were leaving we were told that the O.C., although she was gone to her meeting, had lunch prepared for us. What a treat these O.C.'s in Kenya have gifted us with. Following lunch we made our way back to our hotel and Gilbert caught transport back to his home in Migori, I sent a beautiful scarf with him for her.


Having arrived back at our hotel the guys are off chatting or visiting or perhaps they are even resting, I am not sure but I am thankful to Edward and Aaron for writing down all the testimonies for me so that I can add them to this blog. I also appreciate it that Edward now does some of the translating for me, it gives Aaron a break and it makes it so much better when doing the object lessons. All I have left to do is add a photo and then I will be finished before dinner which means after dinner I can shower and rest. YAY!!!

At dinner Aaron and Moses both commented on how very many men today were weeping during the presentation on forgiveness.

Tomorrow, we have one prison crusade and then it is a travel afternoon so this is our last night here.We so appreciate your prayers please continue to hold us up before the throne of grace.


That none would be lost,
Arlene
Posted by Arlene at 7:57 AM