Ministry Partners
Good morning from Jinja, Uganda. I set the alarm for 5:30 this morning so that I could talk with Alfred, the IRM Vice-President who is in Australia. We were fortunate with the WhatsApp to be able to talk with him for over an hour. Trying to take care of IRM details by phone is not easy but Alfred is doing a terrific job. However, I miss him being here in person.

We ate our breakfast Pineapple, Spanish omelet, bacon with French toast. Then we headed for Jinja Remand Prison. They were doing road construction and it’s really interesting if you can imagine driving 5 miles with a speed bump every hundred feet or so. Between that and then getting on the dirt road to the prison, Aaron said that, to date, this is the worst road he has had to drive on.

It was disappointing that that a layer of fog was laying over the whole area so there was not much chance of being able to look at the beautiful scenery. At one point, we drove over the bridge that is at the head of the river Nile. Men were there cleaning as we drove by. 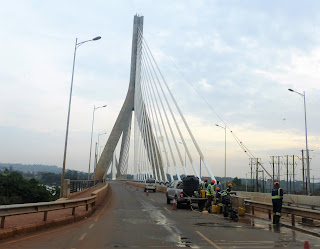 It’s quite an stately looking bridge if bridges are stately to look at.

When we arrived at the second checkpoint going to the actual prison there was not just prison guards there but a colonel or major from the army. He immediately walked up to our van and asked me who we were and what our purpose was there. As soon as I explained what our mission was he asked me for a business card because he wanted my phone number. Now, I carry two different business cards, one business card has the IRM information on one side and my Foursquare information and phone number on the other side. The second card has my IRM information as far as my name and my title as well as Alfred‘s name and his title and on the backside it has a picture of me and some children and it states that what the mission of IRM is. No phone number. Would you like to guess which card I gave him, Stop laughing. I gave him the one with the picture on the back of all the children without phone number but he took the card and after thanking me for it he said he wanted to keep in touch. He walked away and got in his vehicle and drove away. Aaron and I could not contain ourselves as we burst into huge laughter. Oh, I hope you are seeing the humor in all of this, I am laughing now even as I write this. Sorry I can’t help myself.

When we arrived at the prison guess who was there? There he was, talking with one of the officers but he greeted us again and spoke to us as we walked up to the entrance of the prison.

Once we got inside Aaron signed the book as usual and we were taken to the OC’s office Where we were introduced to a very young, pleasant man with a broad smile who later told me that he was 31. I have to tell you just like the OC yesterday, I was impressed. What a fine young man that I could tell immediately had such a kind heart for the prisoners. After we spoke for a few minutes, I asked him if he would see to it that all of the prisoners were assembled, unlike what happened yesterday.

He immediately called one of the officers and instructed them to begin to gather all the men and had Aaron go with him to begin setting up our equipment. Although the battery in our sound system is not working, it still works when it is plugged into electricity. While Aaron was gone, I had the opportunity to talk with him for some time. He told me that Remand prisoners are there generally for six months and at the end of six months if they are found innocent they are released but if they’re found guilty then they’re sentenced. He said that because the judicial system is so bogged down and take so long that some of the prisoners here have been here since 2014 and they’ve never had a trial as of yet.

He told me he had only been here for four months and he is trying to do all we can to expedite their trials so that the men who are innocent can go home. I wish I were free to post a picture of this young officer and myself but I am not able to do that here. But you can see the kindness in his face. After a short period of time we could hear Aaron talking over the sound system so the OC himself escorted me out to a huge open area where all the men were assembled. It was going to be another day when I spoke in the round as a man we’re seated and standing pretty much all the way around me.

I was fortunate that they had me set up under a tree but there also was a bit of space out in the sunshine that I could also walk back-and-forth as I talked to the men. The Holy Spirit was again working mightily today as the men made decisions for salvation, forgiveness, and apologizing. It was interesting as Aaron was packing up to go that so many of the men came up to me and thanked me for coming and asked me to come back again. I was surprised when one of those men was a Muslim man wearing his cap. He said, “Thank you for coming and the message you shared.”

The OC escorted Aaron and myself back to his office and allowed me to take a photo with him. When Aaron took the photo he said, “Did you capture my smile?” and yes, Aaron had captured his smile. You have been praying that we would find favor with those we meet and God is answering that prayer. Please continue to do so.

At one point just as we were leaving the prison one of the guards handed Aaron a small package that contain “African pancakes“. Well, they’re small about 2 1/2 inches in diameter and ¼” thick. Aaron offered me one and I was very brave as I broke off a tiny piece. Have you ever tasted rubber? You would have to have very strong teeth to eat those tiny pancakes!

As we left the prison, we knew it was going to be a long drive home to our hotel in Kampala. But, it went quicker than we thought. I think for the first time on this trip we were not caught in a traffic jam and sit out on the highway for a long period in the hot sun. Once I arrive back at the hotel Aaron left to wash the van, that was very dirty from the dirt roads and run another errand.

As I sit here writing this blog I hear the thunder and the rain. I’m so thankful we did not have rain while we were doing ministry. We have two crusades to do prisons tomorrow and we appreciate your continued prayers
That none would be lost,
Arlene
Posted by Arlene at 7:39 AM