Ministry Partners,
It was a late night last night as Pastor Aaron did not get back until very late but the van sported a new windshield. They were unable to fix the air conditioning so today made for a very hot van going and coming to the prison. So, after lunch today he returned to the shop to see what can be done. I makes me appreciate so much the air conditioner in my room that allows me to sleep comfortably and the  fridge they brought last night so we can have cold water.

Because of the heat we decided  to take off for the prison early at 8 but that allowed me to "sleep in"until 7. We had a nice breakfast of pineapple juice, pineapple & watermelon, sausages, pancakes, beans and tea. I saved 2 pieces of wheat bread for my lunch along with a banana. Aaron saved his pancakes to make a sandwich for his lunch. Nothing like being prepared. 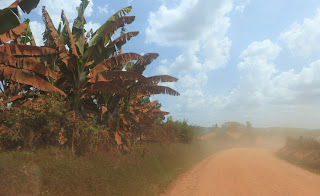 As we drove to the prison today the red dirt from the traffic on the dirt road was everywhere in the air covering the plants and foliage giving everything a red/brown dirty look instead of beautiful green. I feel for the people walking alongside the road as they are showered with dust and I wonder how they ever keep that red dust out of their houses. I don't think dusting once a weeks works here. Even with the windows closed and I held a scarf over my nose and mouth the red dust made it hard to breath without coughing.

This was a small prison today with 180 men and 3 women. We were greeted by one of the officers and asked to wait outside as they were finishing breakfast. As we waited I observed the women prisoners sweeping the dirt, trying to get up any leaves or trash off of the road with brooms made of the mid-rib (spine) as Aaron calls it of the leaf of the palms here. What a futile job.

Aaron and I stood in the sun in the walkway with the men in the shade of the porch in front of us and some under a tree to one side with some officers and the shade of the water tank on the other side. Behind us the three women were seated in the shade of the front entrance. even though it was morning, it was blistering hot. At one point I looked over at Aaron and sweat was pouring down the side of his face. When we got back to the hotel and I changed out of my dress the whole top of my dress was wet. It was a wise decision to come as early as we could.

It is so thrilling to watch
their faces as the Holy Spirit was touching their hearts. These who are known for making wrong choices made 3 good choices today:
And then came the powerful testimonies:
We thought we were finished when the guard who had welcomed us came forward and said he wanted to speak to the inmates.
We were asked by the staff to please come back. It was a wonderful morning and we had MUCH to give God praise for.

After lunch Aaron took off to exchange money and see what could be done about the van air conditioner. That left me to get this blog out to you. which means I will get to bed early tonight. Tomorrow we have our first village/church crusade.

It is true as someone just messaged me, "Satan is not happy with you." So true but he does not have the victory here, Jesus already won the battle and we are His warriors!

Please continue to pray for:
Thank you to each of you who is holding this ministry and us up in prayer. May our Lord richley bless you for taking the time to do so.


That none would be lost,
Arlene
Posted by Arlene at 5:11 AM