It is hard to believe that we only have 8 more days of ministry left to do here in Uganda before we head off to Kenya. The days here have been hot and long with challenges along the way. Nevertheless, it has been a joy to watch God come to our aide, as always, in so many situations. Aaron had a bit or a sore throat this morning but other than that and my back blisters we have remained pretty healthy. We thank you especially for your prayers for us concerning that, please continue.
But I must tease Aaron every once in awhile as it is 5:40 pm here and he is taking a brief nap before our 6:30 dinner but no nap for me as I need to get this out then I can go to bed at a decent hour tonight. Aaron actually, does more than me as besides translating  for me , he sets up equipment, drives and maintenance the van, exchanges money and books our hotels. Always looking out for me and keeping me safe. So, he earns a brief nap for sure. He is doing his part and Alfred's part in his absence. I have known him since 2005 and worked together for almost that long. I consider him a  brother in the Lord for sure and a good friend.

Today was another really early morning for us as we left Kampala at 7:10 and did not arrive in Jinja at the prison until 9:05. They were holding us in the reception area  and the time was ticking away with no one really attending to us. An officer whose position was "The spiritual welfare of the prisoners" as he told me, came and began to chat in very good English. About 9:45 he stepped across the room and softly knocked of the O.C.'s office door, then entered. He was there for a few moments and then the door opened and he motioned us inside.

The OC introduced himself as a Christian and said he had only been there for 4 months and he began to tell us of his vision for the inmates. It is to lengthy to explain all of it here but what a wonderful vision he has for seeing that the 1,525 prisoners under his care will be trained in a skill and be ready for a productive life outside the prison when they are released. After the crusade we stopped by his office and when I told him I was disappointed that only about 800 attended and that I wished more men had attended, he was shocked that his staff had not done a better job preparing for us.

The O.C. said next time I come he will see to it that everyone attends and he wanted to exchange emails to keep in touch. He said he was grateful for the gifts we brought and they contributed to his vision and that our coming had a great impact on the inmates.

The inmates that attended and the O.C. invited us to, "Please come back again."

We set up in a corner of the huge courtyard and I looked up at the towering cell rooms around me, 3 stories high. I could see the men's wash but also some of them peering down at us. I am sure they were listening but only about 600 actually came. It was overcast so they were all around us as we spoke. We were competing with a lot of other noise in the courtyard but nevertheless the Holy Spirit spoke into hearts today with decisions for: Salvation, Forgiveness and Apologizes.

So many men in the courtyard and yet it was the first time in all the years I have been doing this that both Aaron and I felt a bit disrespected that the men would not come and sit but talked loudly milling around.

Then we went to a separate complex and the same property for the Women's crusade. Once again we sat in the reception area for almost 45 min. being totally ignored by the staff, the O.C. was not there

Finally they took us down a long hallway lined with women to an extremely packed small room. I stood kind of in the doorway so everyone could see and hear as did Aaron as we switched sides from time to time. As we were doing the beginning of the forgiveness portion two men and a woman entered and sat down. I must say it is a bit disconcerting when I am in the middle of preaching to have others enter disrupting the focus of the prisoners.
Then a 2nd guard entered and told Aaron we needed to wrap up as the other preachers were there to minister! I looked at Aaron and said,"We can't finish?" and before he could respond the elder pastor said, " You are preaching a good message. We will give you some of our time."
I thanked him and we quickly finished our program then I thanked them again as we were leaving.

It was clear that Satan did not want us here today but God plan in the gracious hearts of the other pastors towards us defeated him.
I was thankful for each woman who made decisions today, more to give God praise for.
A guard at the women's prison today said I looked strong and as if I was in my 50's. If it hadn't been inappropriate I would have kissed her on the cheek. Even with my grey hair everyone seems surprised when they learn my age. 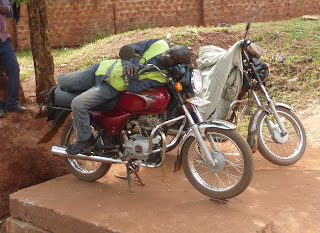 When it is just too hot and you want to take a rest even your bike works!

We drove to a place we have stayed at a couple of time when we have been in the area in past years but they have really raised their rates so we will not be able to stay here again. But since it is only one night and we are both so tired........tonight we stay. We will make upon the difference somewhere else where we can find more reasonable rates.

That none would be lost,
Arlene
Posted by Arlene at 9:40 AM