Ministry Partners,
I am not sure when I will get this posted but I just had to let you know how yesterday and today has gone…….QUITE different that what was planned.
All went well at PDX although I was told to go to the Delta counter when in fact I needed to go to the Alaska counter. But God provided a kind Delta employee who gathered my 3 bags onto a cart which he pushed to the appropriate counter.
The flight to Los Angeles went well but upon arrival those traveling to Amsterdam were told that the fright had been delayed by 2 hours and I would not make my connecting flight to Rwanda as planned. I waited at the gate but no one came to man the counter until 30 min. before the new flight time of 4pm.
At 4:15 everyone was boarded and the agent at the door was saying “last call, we need to get in the air” to which I responded “Not without me I need to be on that plane!” The attendant behind the counter had been working all that time trying to get me booked on another flight and had taken the current boarding pass that I originally had.
There was another young man waiting behind me that was also waiting to get rescheduled to Entebi (?sp.). I told him that I thought God was trying to work on my character concerning patience and we both laughed.
I explained to the counter person about the need for me to get to Rwanda for an important meeting with government officials and that I would take any flight or airline that would do that. While I was waiting I remembered praying with Shelly before I left thanking God that I knew He was in control and for going before me and after me. I kept reminding myself of God’s faithfulness, that I would see Him implement His perfect plan….for me and for that important meeting and Amsterdam to Rwanda flight.
Finally, I had my boarding pass in hand along with the paperwork for my Amsterdam to Kigali (by way of Nairobi, Kenya) flight after a 10 hour layover in Amsterdam. But it was not until I arrived in Amsterdam and went to the KLM transfer station that the lady actually gave me my boarding pass and I realized what God had actually provided.
Although I was routed to Kenya with a 2 hr. layover I would arrive Thursday morning at 9am instead of 8pm if I had stayed with the direct one flight a day.
It is now 3pm in Amsterdam and I am exhausted and weary but giving God praise and thanking him AGAIN for his provision and faithfulness. I have not had to wait until I arrived in Rwanda to see God do great things……He is doing them now. I am so thankful too for the KLM agent in L.A. who worked so hard to find a flight that would get me to Kigali before the scheduled meeting.
A nice young man in a electronic store here where I needed to buy a computer cord let me use his phone to call Alfred so he would know my new arrival time in Kigali tomorrow morning AND he is letting me use the store internet feed to get this posted. Another blessing and provision from the Lord's hand!!!
I appreciate your continued prayers.
Giving God praise and thanks,
Arlene
Posted by Arlene at 5:55 AM 2 comments: 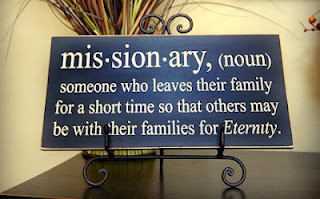 Although each of us is called to be a missionary in our local community, this missionary is thankful for God's direction and provision for this opportunity in Rwanda.


"The Spirit of the Lord God is upon me; because the Lord hath anointed me to preach good tidings unto the meek; he hath sent me to bind up the brokenhearted, to proclaim liberty to the captives, and the opening of the prison to them that are bound;"   Isaiah 61:1

I appreciate team member Shelly Brown who will pick me up at 5:45 this morning to take me to the airport and then stay to help me when we get there. It's so nice to have her help me and help with the extra luggage, with my carry-on that makes 4 pieces.

I fly from PDX to Los Angeles to Amsterdam and then to Rwanda, arriving there tomorrow evening.

Getting on the internet is sometimes questionable as it is down and often weak but I will try and post as often as I can.

Posted by Arlene at 5:31 AM No comments:


Ministry Partners,
My day of departure for Rwanda is almost here......tomorrow.

This morning as I chatted with Alfred in Rwanda it appears I am not the only one who is excited as he and our wonderful staff there are also excited for our ministry time together. 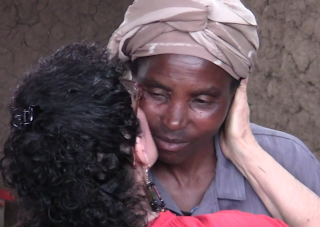 
Thank you for your prayers concerning the scheduling for an appointment time for me to meet with the Commissioner General of Prisons. The day we requested, May 31, has been approved and set for a face to face meeting. Thank you Jesus! Continue to pray that I would find favor with those I meet with according to God's perfect will in all of this and that I would be an Ambassador worthy of my calling because of the strength, courage and wisdom available to me from the Holy Spirit.

I must again say thank you to each one who prayed and gave sacrificially to the "Bibles for Rwanda Project". Because of your generous financial gifts I was able to order 4,000 Kinyarwanda Bibles. I will go to the printers when I get in Kigali and order the Discipleship Booklets that are needed to go with them. 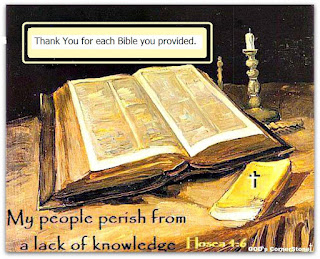 I know each "set" will be a treasured gift as each receipt will be able to grow in their faith.

Last minute packing and printing of the last papers I need to put in my briefcase will take up today's time and I appreciate my neighbor, Norma, inviting me to dinner so I do not have to cook tonight.

Thank you again for your continuing prayers for all aspects for this ministry, our trip and especially for good soil for the Gospel of Jesus Christ.

That none would be lost,
Arlene
Posted by Arlene at 12:25 PM No comments:

Ministry Partners,
It's hard to believe that the time for my departure to Rwanda for the 9th time is only six days away. Everyone on both sides of the "pond" has been very busy getting final plans and details down on paper.

My trip to the Klamath Falls area went well, thank you for your prayers and 'Thank You" to Malin Baptist Church, United Family Fellowship, Bible Baptist and Klamath Christian Center. I spent the evening of my 68th birthday at Klamath Christian Center, sharing my testimony with about 80 senior High School/College students. What a wonderful group of young people and God gave me a special birthday gift as I watched Him add 7 to the Lambs Book of Life........birthday presents don't get much better than that!!!

There were so many people that did special events that contributed to the "Bibles for Rwanda" project as well as general help for the team. The problem with thanking specific people is that I am sure to leave too many out so please forgive me. But I must thank a group of young girls (Mom's too) who for a second year held a yard sale for the Bible Project. 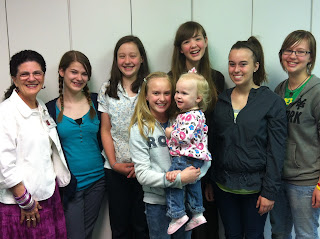 I am sorry that not all the girls were available for this photo.
What a blessing it is to see these girls work so hard to raise funds for Bibles, understanding the importance of someone they will never meet having God's Word. Then there was Olive Photography and.... and.... and.... and the person who sacrificed to purchase 1 Bible/Discipleship Booklet set, "THANK YOU" to each one. I wish I had the words to convey what a huge blessing each Bible is. 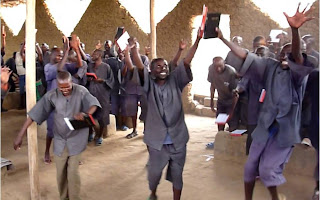 TIG Prisoners celebrate at having a copy of God's Word

I learned last Sat. that the government is "holding" the signature of approval for our Prison Ministry application until they can have a face to face meeting with me. I am so pleased, and see God's direction in this, that the Commissioner General of Prisons has requested a personal meeting. Please pray that IRM would find favor in all of the meetings I will have with those in government positions including wardens, as well as God given opportunities with villagers, ect., ect.......

Yesterday, following our last U.S. team meeting, I handed off 4 team suitcases, packed and weighed, 49# each, to team members Pastor Al & Kathy Carpenter and Pastor Shelly Brown. Now it is time to get the final preparation and packing done at my house, Tuesday morning will be here....SOON.

Thank You for your continued prayer and support. Remember there is still time......

Just 20 days until I leave for Rwanda and I am thankful for your prayer and financial support as together we "Go and make disciples of all nations."
There is still time for you to participate in the "Bibles for Rwanda" project. 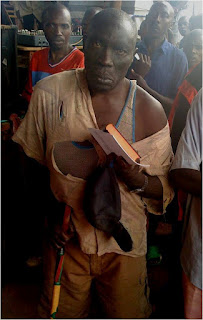