It is hard to believe that today we will complete our 27th prison crusade and that we only have three more to do +1 church crusade until we cross the border and begin ministry in Kenya. A couple of the women's prisons that we thought we would be doing separately were combined with the men's prison by the same name so instead of doing 32 prisons here in Uganda we will do a total of 30.

I really like the place where we stay and I have had the opportunity to meet some nice couples here. That is the great thing about them holding other conferences here is that I can meet pastor's and their wives.

Today, although I could have slept in until seven I was awake at six. I was also awake at 1:30 this morning because although I was sleeping under the mosquito net, something, I presume the mosquito bit me three times on my arm. I got up and put some stinky mosquito repellent all over me and returned to bed praying that the mosquito that bit me was not a healthy female carrying malaria. But I feel fine today and have not had any ill effects. For some reason the girl that cleans my room, although she does an excellent job, she always opens two small windows in my room and opens a small window in the bathroom. As soon as I come back into my room I close the windows but today I went down to the reception desk and asked them to please tell the girl not to open my windows. I would rather have the room a bit stuffy and not give access to mosquitoes.

Today's breakfast was pretty much the same, toast, black tea, and pineapple but I also had a banana with some corn flakes. I saved an additional banana, one sausage and two pieces of bread for my PB&J lunch sandwich. Aaron and I have already decided that Sunday night we will have pizza and salad for dinner and save the other half of the pizza to have for lunch on Monday as we head toward Kenya.

It really makes me laugh when you ask someone a question about distance here, they will say it is close like Aaron said for today's prison but because of the traffic jams and took us an hour and 40 minutes to get there. As we travel the roads we see a bit of everything and today was no exception. I missed getting a photo of the two live calves on the back of a motorbike and the one with a live pig. 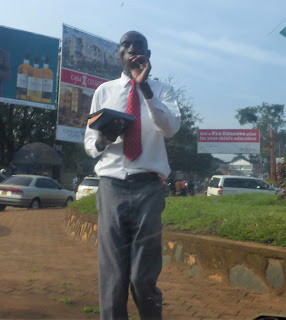 But as I was thinking about preaching today there was this gentleman preaching at a round about. He was hollering loudly but with cars, vans and motor bikes over three wide with everyone trying to secure a spot and not get a damaged finder I'm not sure they were listening.

We were welcomed by the O.C. who said that he was new and had only been there 10 months. He called his Deputy O.C. right away and had him began assembling the prisoners. Then when I got to where the prisoners were I was told to go up into the overhang of the building porch in the shade but I asked the Deputy O.C. to please let the men sit there that I would be fine. They also brought in six women who sat behind me a little ways, under the shade of a very small tree. There was another small tree close to where I stood and that is where the Deputy O.C. sat.

The sun was pretty hot today so I was thankful at one point while I was speaking that I felt a very thin cloud kind of cover the sun for a few minutes and it gave me some relief from the sun. So many young faces, sad and hopeless looking, I am so happy that I can share with them the hope that Jesus has brought into my life. Pastor Aaron tells me that the area we were in is pretty much Muslim and there were many of them there today. Generally, when I see prisoners making good choices for themselves and choosing salvation, and praying forgiveness and apologizing to each other it makes me know that what God is called me to do here is important. But there are days, and we see many of them, like today when I see so many Muslims making that same decision for salvation, forgiveness and apologizing. And once again all I can do is to say I praise you Jesus, I praise you Jesus.

And yes there were a couple who gave testimony to what God had done in their hearts while we were there.
When we got ready to leave one of the young guards said that he had worked at the prison for five years and he had met me any years ago when I had come to the prison to speak. I was surprised when he took out his phone and asked one of the other guards to take a picture of us. I told him that then I wanted a picture with my camera with him to which he agreed to. The O.C. met us outside and he had agreed to allowing a picture with him for my report for Commissioner Elizabeth so as Aaron got ready to take the photo the young officer also stepped up and asked if he could be in it with us to which the O.C. agreed.

Goodness it was so hot as we drove away from the prison at 12:45 that I was once again thankful that we had air conditioning. We made it back to the hotel in good time and we sat and had our lunch before Aaron took off to exchange the vehicle for our old van that they said was fixed and ready for us. While he is in town he is also going to see if he can get the battery in our sound system replaced. We have still been using it when we could plug into the prison electricity with our long extension cord but we need to get that battery replaced for the prisons where we go that have no electricity. I hope he can get that done today.

Tomorrow we have another prison crusade and the afternoon will find me working on final details as we head toward Kenya on Monday although we will do two prison crusades before we cross the boarder.

Thank you again for keeping us in your prayers and please add to your prayer list that everything for us at the boarder will go well and we will get through quickly.


That none would be lost,
Arlene
Posted by Arlene at 5:27 AM