Dear Ministry Partners,
Murabeho (Goodbye) was a word that all of the team members found hard to say as we prepared to leave the IRM partners in Rwanda following our ministry time there. 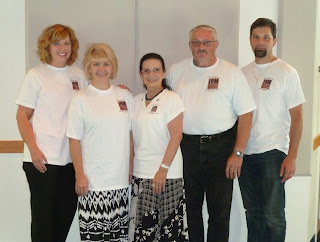 The U.S. team - Leslie, Toni, Arlene, Terry & Brian
For me, this ministry trip was my first time to travel to Uganda and my tenth time to go to Rwanda but for the four U.S. team members it was the first time their feet would touch Rwandan soil, see the rolling hills and meet some of the beautiful people there. It was an opportunity for us to serve alongside our dedicated Rwandan partners to minister in villages and prisons, sharing the gospel and training disciples.
Because off the work God has called IRM to do in the Great Lakes Region of Central Africa there are struggles at times but with each struggle we watch as the Holy Spirit pours out His power, equipping us and providing for us. It was that way when two days before the U.S. teams arrival our signed IRM application to do Rwandan prison ministry was not in my hands and it “appeared” like there would be no prison ministry for us to do but God had his plan and our application was approved. 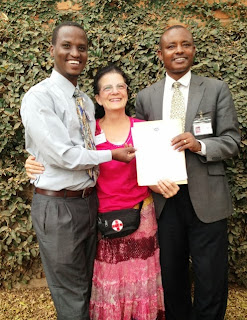 This spring as I was preparing for the trip I told many partners that I felt that we were going to watch God pour out His power like never before and so he did at every turn for the five weeks I was in Africa. At the end of the trip Pastor Peter stated, “This trip had been more amazing, more powerful and more unique than any other trip.”

A word to IRM partners from Alfred Mupenzi,  IRM Vice-President Rwanda:
“Thank you to those of you who supported IRM prayerfully, financially and practically. Your prayers were answered and your support blessed many thousands of Ugandans and Rwandans this year as we witnessed the Holy Spirit bring to salvation 14,726 and as 13,637 confessed forgiveness upon those who had hurt them and upon themselves, 95 made other commitments and 1 was delivered from demon possession but there is much more that is yet to be accomplished. We believe that, by God’s grace, IRM will have the privilege of seeing the Lord achieve many more powerful things in the village communities and in the Ugandan and Rwandan prisons in the coming years.”

I just want to add a very special personal “Thank You” to each one of you who partnered with us for this trip.

That none would be lost,
Arlene
Posted by Arlene at 1:37 PM No comments: