Well, today turned out quite different than I expected. I had a difficult night with my stomach bloating and having intestinal issues, thinking perhaps it was caused from the rancid smell from the kitchen. Although I was not hungry, I knew I need to eat something so I had some pineapple, 1/2 piece of wheat toast and 1/2 cup of regular tea but my stomach was not happy with that.

After making 5 trips back to my room before I could get in the van I had concerns as to how I was going to preach today at the prison. When I was finally ready to get in the van my team was waiting and they agreed that I needed to go to the clinic. I wanted to get to the prison since we needed to finish there as early as possible so we could get on the road to travel to the next town for tomorrow's prison crusade. But the discomfort I was in helped me to make the decision to agree with them and off to the hospital clinic we went.

I did not have to wait but was seen by a young woman doctor. My blood pressure and other vitals were taken and she ordered a blood draw and then told me to wait. I kept looking at my watch, watching the minutes tick by and wanting to get to the prison. Finally, she called me into her office again. It was not another bout with malaria as the team and I had feared but she said someone with filthy hands had prepared food for me and I had an intestinal bug. She prescribed two kinds of medications and told me to also take the Cipro I had brought with me. I am so careful about what I eat that I am not sure how it happened but I'm so happy I took the teams advise and went to the hospital. Meds and visit about $35.

Then we were off to the prison where we entered the Med. Security section with long term inmates but no murderers there. Some were older but oh so many young men, I glad I did not know what their crimes were. 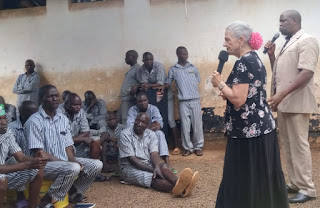 Chaplain Edward and Arlene sharing the Gospel to 400 inmates

Again the Lord was gracious as was the Holy Spirit, they made decisions to receive Christ's free gift of salvation/eternal life and prayed the forgiveness prayer. They were a bit slow in responding to the encouragement to apologize invitation.

At first they were hesitant to give testimonies but some did:
When we finished, I quickly made our PB&J sandwiches before we started the long 5 hour drive. I was not much help in the way of company for Aaron as he drove because I put my seat back and slept some. It will be good to have the prison close for tomorrow mornings crusade and then the team will say our goodbys. Moses and Edward Moses will go their separate directions and we will head to Kampala, Uganda.

Tonight, I gave Moses and Edward their "Thank You's" as well as a small gift for their wives. They both did a lot of work to make the Kenya section of the ministry trip a success.

My heart is thankful for each prison I have been blessed to go to but my heart is also sad that tomorrow will be my final prison crusade for this trip.

Your continuing prayers are appreciated.


That none would be lost,
Arlene
Posted by Arlene at 11:30 AM