Every trip as we finalize portions of the trip we pray that we will finish each portion well and so it is with this trip. Yet, sometimes I am left with making a choice that I wish I did not have to make and so it was also today.

First, I forgot to tell you yesterday that as I was leaving the church the pastor came out and shook my hand putting a folded envelope into it. I looked him in the face and I said, "Oh no." 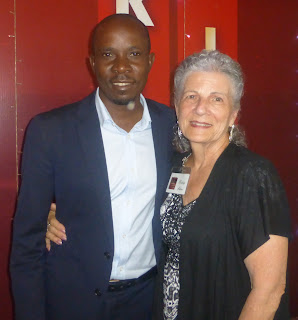 And before I could say more he said, "You need to take this. If we do not bless you God will not bless us." I thanked him and I said it was gracious of him to give us such a gift and I told them that I would use it for Bibles on the next trip. The francs he gave me were the equivalent of $30. YEA! That will purchase 3 Bibles/Booklet sets for next year.

We had our breakfast, took our lunch item and said our goodbyes early at the hotel and headed into town to get some information that Aaron needed for us to cross the border so it was late by the time we left Kampala. It just is not the traffic that is an issue with a large number of people were walking along the road and also crossing in front of you. One young woman, who Aaron said was about 20, with a baby on her back was standing on the curb and looked directly at us and as we got almost to her she stepped off the curb in front of the van. Only Jesus and Aaron good driving kept us from hitting her and the baby.


I discovered early this morning that the town where we had our last scheduled prison to do tomorrow was 2 hours from the boarder and with 1 hour going through the boarder it would still be 8 hours to Nairobi and that equals an 11 hour drive. But with our last prison scheduled tomorrow if we arrived at the prison by 8:30 they would not let us in until 9 or 9:30 and with a 2 1/2 hour program we would finish about11:30 or 12 noon. Add the 11 hour drive meaning we would not get to Nairobi until 11 or midnight. I have received two alerts from the Kenyan US Embassy about there being a danger to travelers, so in good conscience, and in an effort to keep us safe I made a decision to leave and go directly to Nairobi in the morning. I know it was the best decision but my heart hurts for having to cancel tomorrow's prison. The O.C. today was so nice he as he said the O.C. at the women's prison for tomorrow was a friend of his so he called her on his phone and Aaron had the opportunity to tell her there had been a mistake in scheduling and that there just was not time to visit their prison tomorrow. In all the years that I have been doing prison ministry and making over 230 prison entrances into prisons I have never canceled a scheduled ministry date, not even when I had malaria. In previous years when we traveled in Kenya after dark, one-time we got lost and another time we got hit by another vehicle so traveling after dark is not really a wise decision and although I know I made the right one so that we could get to Nairobi before dark my heart still hurts.

No matter how much time you allow yourself the traffic jams always take more time than you expect so we did not arrive at the prison today until 1 PM. The O.C. was a tall thin man and he welcomed us into his office while thanking us for coming. He said that the prisoners really are forgotten people and he was so happy that we have chosen to come there. As we entered into the prison quarters it was a narrow dark entrance and I noticed a man on the side next to the wall on a pallet that was praying. It was evident that he was a Muslim as he was kneeling down praying and then standing up and then kneeling down again. I noticed that his shirt was ripped across the back yoke from side to side and as I walked by I wanted to try to get a look at his face so I could identify him later if I got the chance. All I could see was that he had a bit of a goatee.

Once inside 77 of the 78 inmates gathered, three of which were women. I did not realize that one of the inmates is not there until were leaving and I saw #78 at the entrance having a deep discussion with a woman, he was the second Muslim. We were in an open rock floored courtyard and behind me was a tree where the three women sat. God also provided an overcast sky so everyone had some shade.

It is an amazing thing when you see even the O.C., who sat through our entire crusade, and the guards making decisions for salvation. But just as we were leaving the inmates into the confession prayer one of the women started screaming, demons manifesting themselves, but we saw the Holy Spirit setting her free. Pastor Aaron continued to translate for me as he walked back and laid his hand on her. I was not sure what to do in that situation so finish the prayer and kept preaching. Pastor Aaron told me later that I did the right thing by not allowing the enemy to cause any more disruption or steal our time.

When I got to the discipleship part and I do it teaching about now being a child of King Jesus and I needed a helper who had just received Christ as Savior my eyes went directly to a young prisoner sitting in the second row, he had a goatee and I recognized him as the Muslim man I had seen praying earlier.

Then when we got to the part where I challenged them to apologize to each other and even to the O.C. more men that I can count stood up and headed straight for the O.C. extending their hand to apologize and then turning to me and extending their hand thanking me for showing them the tool that they can use in prison to live in peace and not turmoil and they can use it there and when they are released they can use it with their family and their community. Choosing to live in peace and not turmoil is a very good choice.

The O.C. and two inmates gave a testimony:
I told the inmates that when the O.C. first welcomed me he apologized because he said he had nothing to give me as a thank you for coming but I told them that watching them make good choices for themselves today was the biggest "thank you" I could ever get. I told them that I tell my friends that when we all get to heaven and they look for me, just look for my white face in in the sea beautiful dark faces. They applauded and cheered at that comment.
Before leaving and gave each of the women one of the donated scarves and I told that the O.C. had agreed that they can each have one of Bibles that IRM had brought. Thank you's and handshakes abounded as I left.

As  I saw a darling little girl so I got in the back of the van and got one of the donated crocheted caps to give to her but when I exited the van and started toward her the downpour came. They quickly put it on her and ran for the van thank you Jesus that once again he had held off the rain during the crusade.

As we were driving down the road Aaron and I made the decision that we would drive as far as we could before finding a place to stay. He kept driving until 6 o'clock where we found ourselves at the border. It will be good to get up in the morning, have breakfast at 7 and then packed the van and leave by 8, cross the border and hopefully make it to Nairobi by 5 o'clock.

So I can say that I would hope each portion of our ministry trip ends like today's did. Aaron and I both feel like God allowed us to finish well today.

Please continue to pray for travel safety as we leave for Nairobi in the morning.


That none would be lost,
Arlene
Posted by Arlene at 10:33 AM