This morning 6:30 was the wake up time as we needed to be packed up, had breakfast and be on our way to the women's prison, arriving there at 8:30.

Breakfast fro me was oatmeal, sausage, fried bread, yogurt, pineapple and tea. The very nice chef also made me some samosas, which I took for Aaron and I to eat later, although they were not on the buffet table.

Bishop Moses arrived a few minutes after we did at 8:25 at the prison. Aaron and I were both surprised that they let us through without Moses but I am sure they remembered us with him from yesterday. We drove just a little way on the prison property to the women's section. As we waited for the women chaplain to arrive i watched some of the women outside the walled area as they picked up leaves and debris and swept the dirt.

The chaplain arrived and Aaron entered with her to set up our sound system. Since they told me there were 5 children there I chose the remaining socks and a variety of caps for them to choose from.

I wish you could hear those 200 women sing. I thought the men could powerfully sing but the women today were just as powerful as they celebrated praising the Savior. I could have listened to them for hours.

The women were seated in an V shape, each under a shaded cover and they had me speaking in one of the sections with just a couple of feet space. I had one group turn their chairs and I walked out into the center of the V in the sun. There was a bit of cloud cover for a while then full sun. I was glad I had put some VERY light sunscreen on my arms and face but wore a short sleeved coverup so the back of my neck was covered. I wear it every day although it makes it hotter for me but I did not want to take a chance on getting my back and neck blistered again.

The Holy Spirit never changes and the demonstration of his power is the same yet different at each prison. Bishop Moses said today was the most powerful and that I was definitely a morning person and that we need to do every prison crusade in the morning. He witnessed guards leaving the gate to come and listen, they too had tears as many of the inmates did.

It is thrilling to watch them make good choices for themselves, choices that will change their lives forever. Powerful testimonies followed: 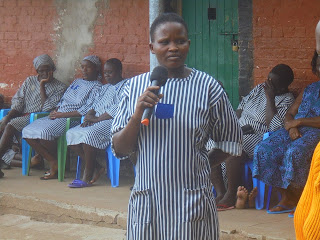 After having two children the man left and I thought I have nothing
left and no one will ever love me with these children. I began drinking
and doing many negative things. But today I realize how much value
I have."
As each women cried as she shared, others were crying. As I mama hugged each one some just held me so tightly. As I sat down one women came and wanted me to pray for her. She wept as I held her in my arms and as I prayed for her she held on to me ever so tightly.

I distributed the socks and caps to the children, two of the little girls were so cute and dressed in the same pink dresses.

It was hard to leave but we had a long 4 hour drive ahead of us. We followed Moses into town where he left his car, he will be riding with us for the rest of this trip as will Chaplain Edward, who arrives tomorrow.

Ever so tired tonight, just ate dinner and I need to shower and go to bed. It is another 6:30 wake up call tomorrow.

Take my word for it, your prayers are being answered in the most powerful way and we appreciate your partnership with us and what God has called us together to do here.


That none would be lost,
Arlene
Posted by Arlene at 9:57 AM