I am so pleased that the prisons we went to were close today. Breakfast for me was simple today as there was not much that sounded good. Spanish omelette w/ cheese, wheat toast, sausage and African Tea. I haven't had pineapple in a few days and I am about to go into withdrawal. I will have to have Aaron buy some along the road if none is available tomorrow.

We arrived at the prison to meet some of the chaplains, one I had met before, tall, good looking and with a huge broad smile which reminded me of my son, Alfred. And just like my son, he was dressed VERY smartly in a dark grey suit and a purple shirt, matching tie and pocket square. They took us to the women's section, separate from the men's prison but on the same property.

10 women had left yesterday so there were only about 36 women there plus other chaplains and guards totaling 9. They said there were 6 babies but there were only 4 there. I was so pleased that the O.C. sat through our entire program. The Holy Spirit's power was evident as when I gave the invitation the receive Christ as Savior, one of the chaplains and the O.C. also stood up and when we asked them to go to someone they had had an offense with and put out their hand to apologize and shake the other persons hand, the O.C. was the first to stand and go to one of the guards and apologize. I told her later that I was impressed with her leadership and courage to be humble and that she was a very good example to the prisoners.

I gave each of the women a donated headscarf and the children received the donated crochet caps as well as leaving a couple of the very small ones with the O.C. for the women who were pregnant. I felt ave a new darling cap for their baby when it was born would be a special gift. 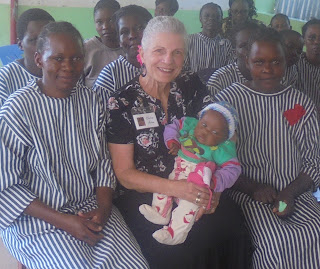 A cap for this darling baby.

There were those who gave a testimony:
We said our goodbys and prayed a blessing over the O.C. and those who had made such good choices for themselves today.

We had just finished the portion giving them the opportunity to accept Christ when they needed to do a shift change, count the prisoners and give the prisoners some food so we stopped for about half and hour and waited. It gave me a break from the sun but I was disappointed as most but not all the prisoners returned. One officer, I think he was the Deputy O.C. (another one I really liked) stayed with us the entire time as well as a guard who later identified himself as also being a pastor.

many of the men made three good choices for themselves today in salvation, forgiveness and apologizing. It is amazing to watch the transformation in their faces as they apologize to each other, the smiles come out and their eyes soften. One man said:
We said our goodbyes and were then off to drive 1 1/2 hours to the next town where we will be doing ministry but the drive actually took 2 1/2 hours, arriving at 5:30. You might guess we were all hot and tired. Chaplin Edward found us lodging at a place called "The Hippo Buck". I was so tired that when he asked me if it was OK I said, "As long as it ad a bed and toilet, it was fine." I am so glad we are staying here tomorrow and not traveling after we hold two crusades and the prisons here.

As I was sitting writing this blog a sweet old man appeared and wanted to know if I wanted some hot water for tea. He returned in a few minutes with the hot water and proceeded to draw my shades and put down my mosquito net. What a sweet old man! Not too happy that I saw a mosquito at my desk so on came the mosquito repellent......whew, that stinky stuff but I remember having malaria 3 years ago and I sure do not want a repeat of that.

They finally called us for dinner at 7:30 and I must say the red/green pepper with onions and vinaigrette was delicious and it was a perfect accompaniment to the spaghetti, which was not only delicious but enough for two people.

Then it was back to my room to finish this blog, bathe and go to bed. Tomorrow is another early day with wake up at 6:30.