Today after breakfast we mad the short drive out by the airport to the prison where we met Bishop Moses and three local chaplains. It is evident the the officers recognize Bishop Moses and it is nice to know that when Aaron is occupied setting up that I am very safe with him. This was a maximum security prison  so for the second time since I have doing prison ministry a woman guard frisked me and thoroughly checked my object lesson bag.

When we got inside I was surprised to see all the prisoners assembled under a very large metal roofed open sided building. I could see there were prisoners in striped uniforms and then there were remand prisoners in grey uniforms and some in street cloths. The choir welcomed us with such wonderful singing and one prisoner played the keyboard the one of the chaplains brought.

The responses were many and the 4 testimonies were pretty much all the same: 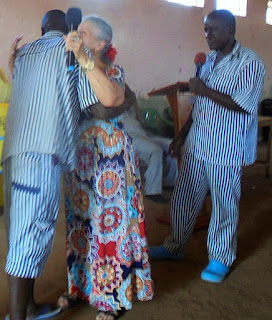 As each each one finished their testimony I gave them a "Mama" hug and spoke a blessing over them. The other inmates laughed at first and then applauded.

Then it was time to leave and go to another area on the same grounds for a Med. security prison there. We had to wait for over an hour so we parked in the shade and had our PB&J sandwiches and bananas.


I must tell you that when we entered that prison and they took us to the building where we were to hold the crusade I was very disappointed. The building was so small and only a few 100 of the inmates could get in to hear me. But Aaron and I agree later that even though the group was small there was a tremendous outpouring of the Holy Spirit as so many men wept. And the responses to each invitation showed His work in their hearts and so did the testimonies:
Again I "Mama" hugged each one and blessed them. The reaction of the inmates makes me wonder when the last time was they were hugged by a parent.

We ate dinner and I wrote this blog before packing up everything as tomorrow, after holding a crusade at a local women's prison, we will be traveling. I will miss my room and air-conditioning.
It is so very hard to believe that we only have one more week of prison ministry. My time here has gone far to quickly.

We value your continuing prayers, THANK YOU SO VERY MUCH, for taking the time out of your busy schedule to keep us before the "Throne of Grace".

That none would be lost,
Arlene
Posted by Arlene at 10:51 AM