The events of yesterday proved that my decision to cancel the last prison in Uganda and use that day as a travel day to get to Nairobi Kenya was a good one. We stayed at a hotel close to the border, which saved us about two hours that we would have had to drive had we done that last prison. We left our hotel at 8 AM and the crossing at the border took about 1 ½ hours. The journey to Nairobi should have taken about eight hours but complications set in during the whole drive.

It took about an hour and a half for us to connect with Bishop Moses and then as we were driving through the mountains the van begin to overheat and we had to pull off and wait for it to cool enough to proceed. I asked Aaron if Ugandans ran coolant in the radiator or just plain water and he said just plain water. We finally found a gas station and Aaron purchased some coolant to put in the radiator and we were finally on the road again.

I was very disappointed that it that point it begin to get dark and as we traveled through an area where the zebras were it was so dark I could not take a photo. Now my camera is not working so I only have my phone for photos and I saw the most zebras I had ever seen in one grouping, probably 100 or more.


Aaron suggested we use his phone cord and the “port outlet” that did not work for us to charge Moses’s phone …… and it worked.
Now, you can think what you want but we all knew it was "a God thing" that Jesus was taking care of us!

From experience, I can tell you that getting lost in the dark here can be a scary thing especially when it is raining, you are unfamiliar with the road and the road itself puts the Ugandan roads to shame with potholes, missing pavement in general and other cars and bikes just trying, as we were, not to fall in one. Moses’s GPS had taken us on a very undesirable road, if one can call it that but it did get us eventually to the Lodge.


We should have arrived at the lodge at 4 or 5 but we finally arrived at Heart Lodge about 9:30+, a 13 ½ hour road trip. It is a Christian Lodge and Charles had stayed up to welcome us. He showed us to our rooms and they had upgraded me to a beautiful suite as well as a suite for Aaron and Chaplin Edward, who met us there. Bishop Moses’s room was upstairs.

But the 7pm dinner I feared would be cold was buffet style laid out for us nice and hot by the chef and with a smile too! Fillets of chicken, rice, spicy meat samosas, buttered carrots, seasoned broccoli and for dessert, ice cream and homemade cookies.


I can tell you, my bad hip was sore from all the bouncing at one point I had to take some pain medication, the first on this trip, but a hot shower and laying flat in bed never felt so good.


Breakfast was at 7:30 with orange and passion fruit juices, potatoes, omelet’s, crepes, pineapple, watermelon, mango and wheat toast. Oh, and not to forget, the spiced African tea.


It was time to head off to the Bible Society to procure the bibles I had ordered. Aaron’s charged phone GPS took us around and about, even though an industrial, slum area. It sure was taking us the long way around but even in this, God was watching out for us as a street police officer stopped us and said we were getting a flat tire on the front. If we had we been whizzing down the freeway the tire would have been ruined and we would have been in all the traffic.


We slowly limped to a gas station and found that there was a problem with the stem. Aaron said it was probably from all the bad road last night.
Finally, making it to the Bible Society, we found that the truck we hired had become a van. And when the very nice lady there showed me one of the 880 large print, soft cover Swahili and one of the 100 large print, soft cover English bibles I had ordered ....... the large print English bible had become small print small size due to cost! Small print is not usable for the inmates as they have no glasses and rooms are dark. We learned long ago that they tend to use those small print bibles for toilet paper since they can’t see them to read. I had been quoted $6.10 when I ordered but she said I was quoted the wrong price, that the large print was $12. We continued the discussion and she agreed to let us have the 100 English for what I had been quoted. She said they would partner with IRM this time in getting bibles to the prisoners. 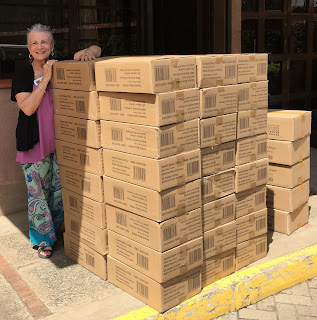 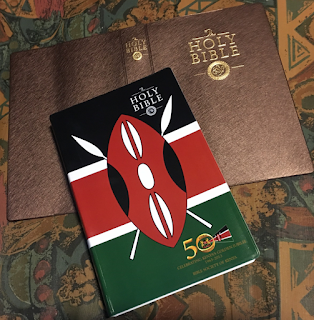 She also said each of those bibles came with a protective brown cover although the cover it had was suitable! Another time when we found favor, thanks for your prayers.
Once the bibles were loaded Edward and Moses left taking them back to Kisumu to pick up the remaining supplies and began off-loading some of everything at the 17 prisons we are scheduled to do ministry in the next two weeks.
Aaron and I went back to the lodge where I made him a sandwich and then he was off to get the radiator fixed. Charles said there was a shop close that they use so we know it can be trusted. My wonderful camera, gifted a number of years ago by a friend, is broken or in need of a new battery so Aaron is going to see perhaps he can find a camera shop close where I can buy one.

Aaron says we need to leave at 6am tomorrow to head to Kisumu where we will do our first Kenyan prison crusade the next day.

As you can see, we REALLY need your prayer covering. Everything that has happened just proves the enemy knows that we are about to share the Gospel, the love of Jesus Christ, in a BIG way and he is very unhappy with us and trying to take our focus off of what god has called us to do here.

I appreciate you each one and your continuing prayers.

That none would be lost,
Arlene
Posted by Arlene at 5:25 AM