It was a bright sunny Saturday morning today and although we planned to leave at 7:30 we did not set off until about 8 o'clock. Aaron had number of things to go over on our van that he picked up last night.

Breakfast was really interesting today, we had all the regular things but we also had sliced tomatoes with melted cheese on top and chapati roll ups. I had both of those, a sausage, black tea and of course pineapple. I took my other sausage, banana and two slices of bread to have for lunch.

Because today is Saturday the traffic is not quite as bad and we did not get caught in any bad "jams". We picked up Pastor Peace along the way as the prison we were going to today was in her direction. I visited this prison a few years ago, and the road to get there means you really wanted to go there. I told Pastor Aaron one thing about it, you would not drive fast over all those deep ruts and he said, "No, you have to go to heaven first." 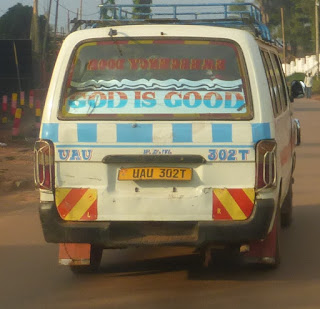 As we travel the roads the signs on the back of the vans vary, I like this one.

I talked before about the driving here but with all the potholes I mean they are medium-size, large-size, extra-large size, extra extra large size and gigantic, it is no surprise that so many of the cars are dented and scratched and scraped. When you meet a car you are dodging potholes and trying to find the smallest one to hit while the oncoming cars are doing the same thing and it looks like you are going to have a head-on collision when all of a sudden the car swerves in the other direction from the way you are swerving. Erin is such a good driver but many times I just hold my breath.

The prison today was a small prison of about 190 with six women. When we got there we were told to stay in the waiting area as the woman O.C. was outside having a meeting with all the men. We could see one young prisoner standing up without a shirt and handcuffs on and then we saw another prison stand up and put his own hands around his own neck and then twisting his arm indicating that the handcuffed man had tried to choke him. Pastor Peace said that the second man said that the handcuffed man had attacked him during the night.

We waited for over 45 minutes before the O.C. came to the waiting area and greeted us and then allowed us to begin to set up our equipment for the crusade. There was one large tree where they had us with the men in front of us on a bit of an upslope, the women were over to the right-hand side a few feet away. As we were sitting in the waiting area I noticed a few thin clouds in the sky and I asked Jesus if possible could he give us a bit of cover today from the hot sun. And that is exactly what he did along with a slight little breeze now and then that cooled things off.

The majority of the prisoners were so very young it is hard to imagine being that young age and being in a place like that. Aaron said he thought one of the women prisoners could not have been more than 15. I had a good time with them today as I watch the Holy Spirit speak to their hearts as they made decisions for salvation, forgiveness and apologizing. After seeing what was going on when we first arrived I know it was a message they all needed to hear.
And there were a few who gave testimonies:

I have to admit I am not very good at impromptu lessons, I like some time to prepare but today I am thankful that the Holy Spirit gave me what I needed to say and Aaron and Peace said that what he gave me was just right.

Then I had the opportunity to give the women each one of the donated headscarves as well as one of the blankets that we had purchased. Peace had delivered them a few weeks ago along with Bibles, booklets, some soap and feminine hygiene products. We do not often get to do that because there is never enough so it was something special for us to do today.

As we traveled home I took to my regular little job of making PB&J sandwiches on my lap as we traveled but Aaron and Peace had to wait until we at least got to the paved road. There is no way I could make sandwiches over those dirt roads, they were far too bumpy.

After we arrived back at the hotel Pastor Peace and I had a meeting going over the details of the offloading she did at the prisons and also the final report that she and Alfred are working on. I am so thankful that they are doing the report and that all I have to do is send them one photo and the results of our time at each prison. They do all the rest of the work, thank goodness.

Well it is almost 7 o'clock here so it is time for me to go get something to eat, then shower and go to bed at a decent hour. We have church tomorrow and Pastor  Peace said we did not need to leave the hotel here until 10 o'clock. YEA!!! That means I can sleep in......... well no, I need to be preparing things here so we can leave on Monday.

It is hard to believe that we only have two more prisons here in Uganda and then we start our Kenya ministry.
I do not have the words to adequately tell you how much I appreciate your prayer covering, thank you seems like to very small words but thank you so very much. Please continue to pray.