Today started with a very long 3 hour drive to Lira Main Prison. Along the way the scenery changed as it became a bit more barren and HOTTER. In case I haven't mentioned it, it'd hotter than I remember it being in May - Aug. of my previous trips. I keep thinking of all that wonderful, cold snow in Oregon this time of year.

We saw baboons and monkeys today in a couple different places. One of the big baboons had a back leg cut off. 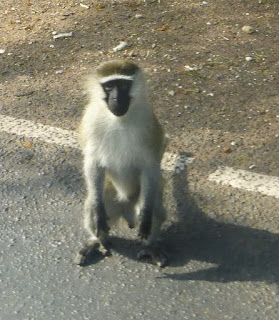 As we passed through trading center (village) after trading center it became apparent that they are experiencing a severe downturn in local businesses as so very many of the storefronts were closed. I wondered where they went and how are they providing for their families now? The residences changed to as more and more thatch roofed round homes appeared. Some single and others grouped like their own little village.

We arrived at the prison about 11 and waited outside the O.C.'s office as she was addressing the prisoners. Finally, after 45 min. she entered her office and welcomed us. She appeared young for being the O.C. over this prison 1,400 condemned  prisoners. She was ever so welcoming and I really liked her. She agreed to a photo and laughed as I told her," Because I am 74, I am mama to everyone so ...," then I gave her a side wise hug as she put her arm around me. I am thankful for the O.C.'s photos as they help identify each prison in the report we turn in at the end of the trip to Commissioner Elizabeth and Deputy Commissioner Apollo. She then advised us to return at 1:30 to set up and begin our program at 2.

Off we went to find a place to stay and the second place we stopped at would work so registered and then went back to the prison. They put up a kind of cover for me against the building and the men were seated around the walls and in the center of the courtyard under a very large tree. Staying under the cover kept me too far from the men so I was happy I had put sun screen on and was able to stand closer to them but in the sun. I was not as comfortable today as Aaron could not translate for me as he is not fluent in Luo and a prisoner who was a pastor translated. Something about his demeanor did not "feel" right and my feeling were correct as later one prison addressed him during the forgiveness portion in front of the entire prison. I gave the prisoner a bible and thanked him for his courage to do the right thing.

There were many there today that made a good choice for themselves by receiving God's free gift of salvation but there were so MANY more who did not. My heart hurts when I see such hardness to the Holy Spirit.

When we arrived at our hotel I just laid on the bed for about 30 minutes before starting this blog and after 30 minutes we went for dinner. I am not one for cold showers but tonight I think a cool shower will fit the bill!!!

We have two prisons tomorrow so please continue to pray for us, we REALLY appreciate it and comment when you can.

That none would be lost,
Arlene
Posted by Arlene at 7:59 AM