It's a beautiful morning in Kuni, Uganda.

I was excited about having a tub to soak in last night but a tub without water is not helpful. Well, I should not say there was no water as there was a dribble of cold water! After going to the reception desk to ask why there was no hot water they brought a gerry can of hot water and put it in the tub so I was at least able to bathe but the long soak will have to wait for another time. Just being able to bathe, there is always something to be thankful for.

Somehow the cook was not able to prepare any single thing I requested from the menu so I requested a glass of milk so I could have a bowl of cereal from the cereal I had with me. Then Aaron went to the kitchen and picked a pineapple he knew would be good so that was dinner for me. Aaron and I have spent some time laughing about the adventure this trip has been, so many things that I will not be able to write about here!!!

We were only a few minutes drive from our prison today and I was ever so pleased with the was the O.C. received us. He was a nice man, I liked him right away and he stayed through our entire ministry time. As the prisoners make their decisions to receive Christ and forgive the O.C. did also. It was nice being outside under the shade of buildings and a huge tree. they were 11 women there and a number of them wept as I challenged them to forgive the man that raped them as a young girl that they might be free. As the prisoners were apologizing and asking for forgiveness at one point the O.C. stopped having the conversation translated but I clearly understood that my hearing his interaction with the prisoners was quite personal and I would not have wanted him to be embarrassed by my hearing. What courage it takes for those in positions of authority to be so transparent with those under them.
The women were so pleased when I handed each one a donated scarf before leaving.

Then it was a nice drive on paved roads but we dropped off to dirt and as we got close to the prison we saw the men making bricks and building the 'structure" so they could be fired. As we waited for the men to return to the prison we parked under the most interesting tree. One of the guards said that the "nuts" that fall from the tree are shelled, then the meat is grated and put in boiling water. An oil then raises to the top and is skimmed off you use on top of foods. 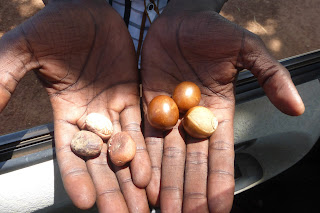 He went to his house and brought back a few nuts and meats as well as some of the oil. Aaron rubbed it on his hands and arms and thought that would be a very good use.
The bark of the tree was amazing as was the structure with a large open are at the base of the trunk. 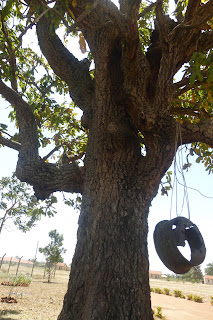 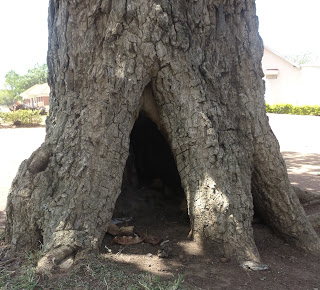 At this second prison we were received by a young, tall very nice O.C. who had the inmates assembled in a small room but it was not as packed as others have been. Our ministry went the same as the one did this morning. I told the men how proud I was of them for the good choices they had made for their lives today. Two prisoners thanked me for coming and told of choosing to forgive today and being set free.

Both O.C.'s today told us how valuable what we are doing is and asked us to please come back. It's nice to leave knowing we found such favor with them.

It took us three tries before we found a suitable place to stay and tomorrow is another two prison day so I will close for now as it's 11 o'clock but tonight I did have hot water and a flushing toilet, YEA!!! Like I said, there are always things to be thankful for.

Blessing on each one of you for partnering with us.


That none would be lost,
Arlene
Posted by Arlene at 12:01 PM