I can't believe that 1/2 of my time in Africa is over, it is going by far too quickly, there is still so much to do.

As our days are filled with driving both near and far to get to each prison today was a bit different. As we left the hotel we drove by the local market and it was market day. The road became even more narrow as people had their wares on the edge of the already narrow roadway. That blended with motorbike everywhere, 40-50 motor bikes to every 2 cars and they were going every which way and that didn't count the bicycles!
It was slow going but then in a few miles I was ever so surprised as a paved EXTRA WIDE road with construction opened before us. Aaron explained that the barren area is actually swamp land.  That's why they put down a white plastic barrier under the road!
I am not sure why they were sweeping a grey/white sandy substance off the top of the road and Aaron did not know. Although we had to stop for the construction we made up for it on the completed part. Nice after bumpy, rutted dirt roads.

Not a banana tree to be seen, I can see why Alfred says this is the poorest part of Uganda.

We were welcomed at our first prison today by a Deputy O.C. who seemed far to young for the position but ever so nice. This small prison is another one that says no one has ever come before to tell us about God's free gift of salvation. The young prisoner who translated for me did a good job but the issue is mine. I am so used to Alfred or Aaron translating for me that others seem strange and I am never SURE they are delivering what I am conveying, it's a great time to depend on the Holy Spirit as no matter what the interpreter says they will "hear" what He wants them to hear just like in the book of Acts! The men made three good choices in receiving that free gift of salvation, praying forgiveness and asking for forgiveness. Seeing the change in their eyes and faces as they are set free is priceless!!!

Then it was back to Soroti to do ministry in the small women's prison. I was thankful for the prisoner who translated for me and we laughed together when I whispered to her, "Now get animated like me." during my talk on forgiveness. At first she just burst into laughter as she heard me yell and the women then laughed at her. It was a good time with an important principle. Following their third good choice today the women sang and danced and they agreed with me that God had set their hearts free.

The crochet caps were once again a big hit for the children and with the pregnant moms.

Tonight I talked the cook here into altering the Coleslaw that was on the menu, he was gracious and the result was DELICIOUS. I asked him the omit the onion and add instead minced pineapple. I usually use Greek Yogurt and just a little Mayo but had to settle for just mayo tonight. I added a bit of Splenda instead of sugar and Aaron also liked it. The cook even decorated the plate with sliced tomatoes. 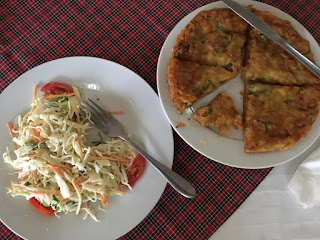 I  did everything except lick the plate. It was a great accompaniment to the pizza and Aaron was glad to take the pizza I could not eat to have as part of his lunch tomorrow.

Tomorrow is another 2 prison day with a distance to drive.

We appreciate your continuing prayer covering.


That none would be lost,
Arlene
Posted by Arlene at 9:05 AM