Jan. 1 saw the dawning of  new day and a new year but I did not want to get up this morning since I was not able to get to sleep until after 1a.m. this morning. The fireworks being set off and the loud music outside my window held sleeping at bay.

Today proved to be another interesting day.

Every day before we set off Aaron open the hood and checks the engine oil and ect. so he was shocked a few days ago when he took the car to be washed (inside and out) that a sweet kitty had hidden in our engine somehow and had been killed. Today as he raised the hood a mama kitty ran away, he checked other things and started the engine as we prepared to go and turned on some christian music to listen to as we loaded up. He then went to the back of the van to finish loading supplies. I opened my door to get in and I heard a kitty crying out so I ran to the other side of the van and shut the engine off, the crying kitty sounds stopped. I went a got Aaron to open the hood where it took some time for us to finally spot a small white, spotted kitty. The security guard came to help Aaron and they were finally ably to get the kitty free. Aaron will check for engine cats in the future!!!

We arrived at a women's prison chosen for us to enter. The O.C. was gone so because other programs were going on, we were asked to wait in her office. The officials under the O.C. were so very nice but they confiscated Aaron's money, van keys and my camera.
After some time one of the large rooms emptied and we were allowed to enter. Inmates brought blankets to cover the many windows and the official gave us a tarp to cover the large open doorway.
About 275 women entered to view the movie, Mary Magdalene. 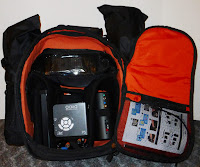 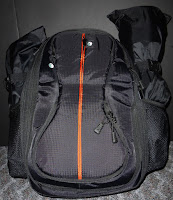 This year "The Jesus Film Co." partnered with us by providing us with one of their portable backpacks equipped with a projector, screen, battery charged by solar panels or electricity, collapsible poles and the most powerful small speakers you ever heard. It's an amazing piece of equipment as they also give you "The Jesus Film" which lasts 2 hours, "The Mary Magdalene" film and some others in whatever language you need, viewers watch and then listen to their own language being spoken. Last year they gave us 2 backpacks, 1 went to our Uganda pastors to use in the villages in our absence and 1 went to our Kenyan pastors to use in villages and in the prisons after we leave. Chaplin Edward says he has observed the prisoners weeping as they watch how Jesus was beaten. I watched the women today also weeping.

Although we were not able to present our teaching on forgiveness, I gave an alter call and 260 woman prayed to receive Jesus as Savior. Our time went differently than we had hoped but God was glorified! Prison officials work under all kinds of constraints so I am very thankful to them for all they do to help us when sometimes we have had to change the day we were originally assigned to be with them. I was impressed with the kindness but firmness of the two who worked with us today exhibited towards the inmates.

We left Peace off on the way home and then went to purchase water for the next few weeks. After eating Aaron left to have something fixed on the van as we will try to visit 2 prisons tomorrow.


That none would be lost,
Arlene
Posted by Arlene at 7:17 AM