I know I have been complaining about how hot it has been here but last night was so cold I had to ask for another blanket and Bishop Moses missed dinner since he was so cold he just wanted to go to bed. All of our bodies are struggling with trying to adjust to the temperature changes. I was thankful for hot water to bathe in but there was no WiFi and mosquito net. After contracting Malaria last year I am doubly cautious about being safe, it was nice of the hotel manager to bring a unit that plugged into the wall that emitted a mosquito repellent. I will have to see about purchasing one of my own to have with me on the next trip.

It was a short trip back to the women's prison this morning and we were in and set up to began at about 10. The two women Chaplains that were with us yesterday met us there today. They set us up in the shade of a long building and the women were sitting on the opposite side in the sun but I told the Chaplains that I would prefer to change side with the women so they would be in the shade but they assured me that it was early in the day and not as hot as yesterday so the ladies would be fine.

We delivered the same program offering them the opportunity to accept Christ as Savior followed by teaching them about the new creation they became in Christ. A child of the King, a Princess and how it affects the person we are inside and our relationship with Christ when we choose to sin after becoming a christian. Then speaking forgiveness over someone who hurt them or forgiving themselves for their past wrong choices, 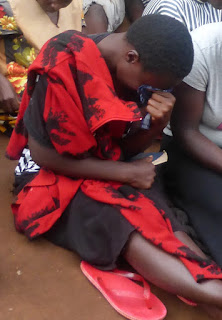 but forgiving is a difficult thing. The women understood that by not forgiving they were allowing Satan to keep them in bondage! Then there were those who apologized and asked another woman for forgiveness.

Today they chose to be free.
The Holy Spirit did powerful work with these 115 ladies today.

Again, the children's caps crocheted and donated by women from Canby Foursquare Church were a BIG hit. 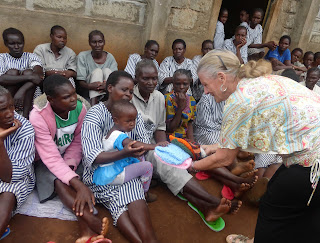 Mama's chose but some little one enjoyed choosing their own.

Then after fixing our PBJ sandwiches we were off for a 2 1/2 hour drive to Kabsabet to spend the night and be ready to do ministry in a men's and women's prison there. We passed both tea and sugarcane plantations on the way and finally began to see banana trees.

The tea fields were beautiful and looked like a lush green carpet.

It will be nice to spend 2 nights in the same place.

Thank you for continuing to pray for the hearts of those we are ministering too and for us.

That none would be lost,
Arlene
Posted by Arlene at 5:57 AM