Good morning Kenya. It was nice to a room that was cool without having to have a fan on me.

It was nice having breakfast with Chaplin Edward and Aaron this morning. After breakfast they left to go buy water for us and the soap that we will take as gifts along with the Bibles to our first prison today.

It was a large prison of 1600 but only 600 were allowed to come, actually I went into their ward to speak. It was cloudy in the beginning but the hot sun came out. Two other Chaplin s were there and a woman Chaplin who said she would see me tomorrow when I go to speak to the women's wing of this same prison. 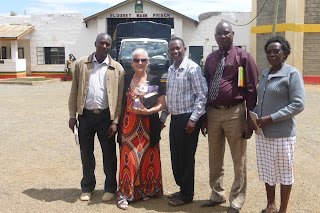 So today we were a team of six, Edward is taking the photo.

The prisoners were thieves, smugglers and murderers, such a mix of ages but mostly I saw such young faces that appeared lifeless. I followed the same format but during my time I was stopped 4 different time so they could "count". Then I would start again and after a short time I would be stopped gain for another "count". Somehow their counts were not adding up to the men that were suppose to be there. It became very evident to the Chaplin s and myself that what was going on was demonic, Satan did not want these men to be free!!!!!

I am so thankful I serve a risen Savior who has more power that the enemy and we have the victory in Christ. Despite the enemy's feeble and distracting attempts the men still received Christ, including all the M_____ in the group, they prayed forgiveness and apologized to each other. Two inmates came forward and spoke of how they had had disagreements with other prisoners and were bitter BUT today they apologized to that inmate and then asked for forgiveness. As they shook hands and hugged the other  while the other prisoners cheered.

The rest of the team said how powerful today's teachings were. Edward says I need to come next year and do a training for Chaplin s. I told him I would pray about it BUT as of today I do not feel called to train men. I feel I need to keep the main thing the main thing and that's sharing the Gospel and the forgiveness message so that men and women can be reconciled to God first and then to each other.

Aaron needed to have some work done on the van so Edward took me dress shopping. We went to a myriad of shops with each lady just sure I should buy a dress from her even if it was not what I wanted. I wanted an authentic African dress with embroidery. Finally I found a top with pants, quite different from anything I would normally buy and it's in green!!!! I will keep an eye out for a dress.

During dinner there was a downpour, I pray the women have a room inside for us to gather in tomorrow.

I appreciate your prayers as the enemy's attacks continue. Please pray for:

That none would be lost,
Arlene
Posted by Arlene at 9:29 AM