Each day is so interesting with stories of it's own and today was no different.

We had an early breakfast and were headed out of town but stopped to get batteries for the microphones, bread for the team and then the Pharmacy for me. I have been having leg cramps and although I increased my water intake was not feeling my usual self, whatever that means! Last evening I saw my nurse friend, Renee, was on fb so I messaged her about the issues I was having. She gave me some good advise and among other things said I needed electrolytes and I should be able to get them from a pharmacy. When I walked in and told the lady behind the counter what I wanted she said they did not have any but just as Aaron and I started to walk away she said, "What do you want them for?" "Oh, we have something," and reached into a counter behind her bringing out a plastic bag. They had plain and flavored and I took all 10 packets of those for a cost of $1.50. She told me to divide each packet into 2 bottles of water. When I tasted the first bottle of mixture ..... yuck it was nasty but after taking a brief nap by the time we arrived at the first prison I was generally feeling better.

It's hard to find almost all of the prisons we visit as we have no map, there are no road signs or residence or business numbers so motor bike drivers are our JPS. If you can imaging driving for 2 1/2 hours to find somewhere only to have to stop every 10-15 minutes and ask a driver for directions. Today we thought we knew which turn to take only to find out we had driven for over 10 minutes down the wrong road then taking 10 more minutes to get started right again.

It was another small prison with no electricity but the nice small chapel just outside the walls provided a seat for everyone and the team and I were not in the sun. It was a win, win. Oh, goodness I can't explain how my heart praises God when I witness every prisoner, the O.C. and two women guards receive Christ as Savior and then pray the forgiveness prayer. Only to be followed by them apologizing and asking each other for forgiveness. These who are known for their wrong choices today were known for their three good choices. Celebrating followed as we gave them bibles and booklets of their very own. 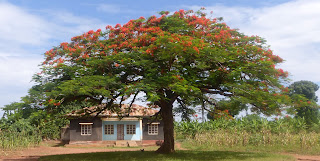 Outside the prison stood this most beautiful red flowering tree.

It was fortunate that the next prison only took us about 1 1/2 hours to get there but we found that half the men had been send to make bricks. So 30 prisoners sat under a small tree inside the walls and i also had shade.
Our program was the same and the work of the Holy Spirit was the same....POWERFUL with every prisoner and the deputy O.C. receiving God's free gift of salvation and praying forgiveness over someone else or themselves. There were questions concerning apologizing and asking for forgiveness that the Holy Spirit helped me answer. And you never saw such smiles or cheers as when they found that they were going to keep the bibles and booklets.

The long drive home was shorter as when O.C. had told us of another route. We almost made it home before the downpour and I don't use those words lightly!!! I went from the van a few steps to the Reception area of the hotel and I was wet through and through. Uganda can teach Oregon about rain.

Tomorrow is another early start, we leave at 6:30am for a 5 hour drive so I need to get a shower and it's already 10.

Thank you for continuing to pray for us.