Another bright sunny day in Kenya to do ministry.

Aaron reported that although a couple of days ago he hit his big toe on a rise in the walkway and knocked his toenail loose...... today God has healed it and he was able to wear his shoes.

Today I visited two prisons I have visited before which is something I do not do often due to there being so many new prisons to visit but because of the turnover in prisoners Edward assures me that almost all the prisoners I will speak to will be new.

The first prison is a women's prison and it was true only a few women were there the last time I was there. The O.C. that received us was new and ever so nice. We gathered inside a building so all of us were shielded from the sun.

As I gave the invitation it was as the enemy thru a cover over the women's hearts, a hardness that was evident as only a few received Christ and yet almost all prayed the forgiveness prayer and they apologize to each other. PLEASE PRAY that the spiritual chains that would keep the inmates here bound would be broken by the power of Jesus and his love for them and that we would see an outpouring of the Holy Spirits power in the prisoners lives.

I recognized one of the older women who was there as one who was there the last time I was there. I called her up and gave her a big hug which the other inmates applauded. She whispered to me that she goes to court Monday so I bowed my head and prayer quietly for her. I think the other women were a bit confused by our continuous hug as I prayed. 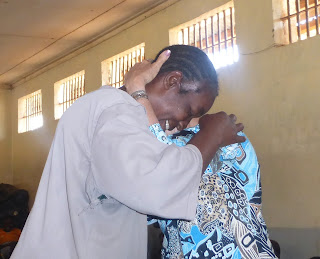 I was surprised she was going to court as the last time I saw her they told me she was a "lifer".

The women were grateful for the Bibles, discipleship booklets, soap, toilet paper and donated crochet caps that they received for their little one ages 1 to 4.

Then it was off to the men's farm prison that was some distance and since Edward was driving his car I made him a PPJ sandwich to eat on the way as I did for Aaron and me. When we arrived he said that he had never had one before and he REALLY liked it. Perhaps it was the pineapple jam that made it so good!

As we were about to enter the prison Aaron said the Holy Spirit told him that someone there had an un-forgiveness issue with his wife that was going to be healed.
We were outside at the men's prison and all went well until almost the end when it began to sprinkle....which is exactly what happened the last time I was here. But Edward told the men to wait and they did responding to asking for forgiveness. That was when the Deputy O.C. stepped forward and apologized to the men saying he had been mean to some of them, he said he was sorry and asked them to forgive him. Then he said he had had an issue with un-forgiveness towards his wife but that he had prayed forgiveness over her and he knew God would heal their marriage even thought they were currently living apart.


THERE IS JUST NOTHING LIKE WATCHING THE HOLY SPIRIT WORK!

Tonight we pack up as tomorrow we will drive to the next town for ministry in a men's prison there and then the next day at the women's prison.
Outside there is a downpour Praise the name of Jesus that he held back this downpour this afternoon and it was only a sprinkle.

Chaplin Edward invited Bishop Moses, the Regional Commandant of Prisons, who joined us this evening and he will be with us for the reminder of the trip.

I can't say thank you enough as you stand with the IRM team, holding us up in prayer, your partnership is invaluable.

That none would be lost,
Arlene
Posted by Arlene at 8:13 AM