I am a bit sad this morning as this is my last morning to awake in Uganda. It has been a whirlwind of ministry with ups and downs for sure, but such a powerful time of watching the Holy Spirit work. Ever day finds Aaron and I saying, “Well, this is a new adventure!” New concerns about our time in Kenya but I am excited to get there.

They did bring me a small fan last night which I aimed at my bed so although I did not sleep well, was wide-awake after only being asleep 1 ½ hours. Although I was under the net somehow I did get a bit on my upper leg, I’m not sure from what kind of bug but I did get some sleep.

This morning as we headed to the prison we went the opposite direction and ended up at the prison district office so we were a bit late arriving at the prison at the 8:45 time that we had hoped to be there for. The OC was such a nice gentleman receiving us into his office we chatted for a little bit and then after hearing that kind of program that we were going to present he said that we had the full amount of time that we needed and he told one of his officers that he wanted them to attend and listen to what we were going to present.

The prisoners were seated in chair two big trees so they had shade and I was able to stand mostly in the shade from the building behind me. A number of the prisoners were not there as we had passed them on the way to this farm prison doing work in the fields. I had never before seen cotton actually growing and the prisoners were long rows going through the field picking cotton today.

I just can’t help but smile when they first see me. They are a bit cautious of me but when they realize that I am not there to preach at them that I’m just going to share a story about Irsrael's choices made out of fear and how Israel dealt with fear, how all of us deal with fear including me, their demeanor towards me changes. Then after so many make not one, not two but three good choices huge smiles and laughter are evident They wanted to know when we will return and as we are putting things away to go these men formed lines around me, pushing each other so as many as possible could shake my hand and thank me for coming. As I shook hands with as many as possible I also spoke blessings over them, thieves, smugglers, rapists and murderers.

Then it was the drive to Kenya where the process at the boarder took 2 hours. It was so hot  here and so many semi trucks, 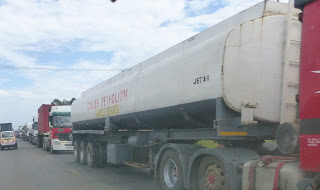 The drive to Eldorate was on paved road  but we did not arrive until 6:30. Our contact pastor, Chaplin Edward, had car trouble and did not leave Kitale until 6:00 so he called his Chaplin friend to meet us at the designated hotel to make sure we approved and if not he would take us to another one. At one point I told Aaron since Eldorate was so large to just stop and get a motor bike to lead us there (they make for a good GPS). I was happy it was nice and we did not have to look further. Edward's friend arrived shortly after we did and he kept us company until Edward arrived.

We decided on the days events for tomorrow and then the men unloaded the van and I am writing this blog. It's 11:30 and I am so tired I will say that is enough for now.
Goodnight from Kenya.

That none would be lost,
Arlene
Posted by Arlene at 12:45 PM