I am thankful that I got a full 6 1/2 hours sleep last night and on a mattress that was just right it helps that I am finally used to sleeping under a mosquito net. I have to admit that I still feel like crawling back into bed.

As we were looking for a place to stay last evening I saw this flower at one hotel we chose not to stay at. 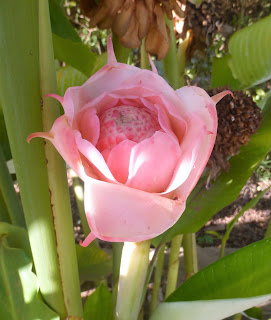 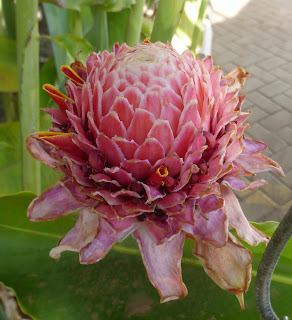 I don't remember ever seeing this flower before but I think the bud is especially beautiful.

I was glad that the first prisons we went to today was not far. A large prison of men and a small prison of women, kept in different area. We arrived at 9 and waited in the waiting area for an hour before the Deputy O.C. welcomed us and told me I had one hour! Aaron explained that we generally need 2 1/2 hours for our program and he then asked me if I could "cut" our program. I could not help myself, I heard myself answer, "Can you drive your car on three wheels?" I was so shocked at my comment and he was so surprised that we all laughed, even Aaron. Then he told me I had 1 1/2 hours.

The Holy Spirit helped me cut some and still deliver the points and then the scriptures He needed to speak into their hearts. Yes, these men could make good choices, three of them, salvation, forgiveness and apologizing and asking for forgiveness. Another young officer sat to the whole ministry time and the prison Chaplin was there for the last 3/4 of our time. As the men started apologizing to each other and asking for forgiveness two prisoners came to that officer and extended their hands which he responded to. It was an amazing thing to watch and the officer looked at me and nodded his head, he understood the importance of having the time to allow the men to respond to each other in such a way.

A prisoner who was the head of the Pentecostal churches within the prison walked with Aaron and I down to the O.C.'s office and on the way he told me he was a Christian and that he had an issue with forgiving but God set him free today when he forgave. I found the O.C. to be a very nice man who had missed our arrival because he was at church. We spent almost an hour talking with him before driving to the women's area.

Again we were held from entering for some time and then when I finally saw the women O.C. she kept us in her office for some time telling me I needed to be dome by 3 as they had another program. That gave me about 1 hr. and 20 min. so chopping again was needed but the women responded to all three invitations just like the men had. The last invitation that I gave them was to stand up and go to a woman they had had words with and apologize and ask for forgiveness. One woman finally broke the ice and did so then the room erupted with women going to each other. All the while there was applause and laughter. I asked the women what their heart now felt like and they responded, "FREE & PEACEFUL!"

I challenged them to continue to allow the Holy Spirit to give them courage to keep making good choices for themselves.

The mothers were so pleased to be able to pick a darling donated hand crochet cap for their child before we left.

The drive to Tororo took about an hour but the road was paved and unlike Kumi where vegetation is sparse due to lack of water, banana trees and other foliage has began appearing. We finally found a place to stay but I had to do some stairs which are difficult for me with my back issues. There is no WiFi but  I am thankful for our portable one so I can post this.  But downstairs they are installing 12
gambling machines on a number of walls, interesting!!! The window and door have no screen so I hope I can sleep tonight in this small room with no ventilation. Yep. this trip is an adventure.

Thank you for continuing to pray, our last Uganda prison is tomorrow morning, then it is off to the boarder crossing and Kenya.


That none would be lost,
Arlene
Posted by Arlene at 8:12 AM