Today has been a busy day. After a fast breakfast, we hit the busy roads both paved and dirt of Kampala on our way to the first of two prisons, where we arrived at 10am. It interesting as ou drive along the sights one sees. Today we passed truck after truck of cattle going to market but unlike America these cattle have the most huge horns you have ever seen and they protrude out of the top of the truck. The interesting thing is that there are bars across the top of where the cattle are and the top is FILLED with people and bags of ???. 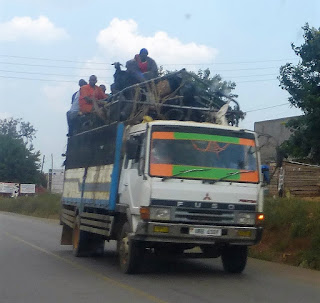 I grew up on a ranch and I can tell you I would not want to travel over these bumpy roads sitting over those cattle horns!

There were only 179, total with 11 women, prisoners at our first prison but they were ever so attentive. The room they provided us was just big enough for everyone and I did not have to be in the sun. So, it was a win win for all of us. I was so pleased that they were able to bring the women in and seat them on the side of the room where I was standing. Most responded to the gospel message and prayed the forgiveness prayer. They also made a third good choice for themselves by apologizing to each other and asking for forgiveness.

When we were done, we asked a couple of the inmates if they had any comments. I was not expecting what one prisoner said. He said one of the guards there, and he named him, had hit him and left a scar on his face and he determined that he would never, never forgive him BUT today after hearing my message and our skit on forgiveness he said he prayed forgiveness over the guard. Oh how I love these broken men and women who want to make good choices for themselves.

We did not have enough bibles for everyone but we did give each of the women a bible and booklet set along with soap and famine hygiene products.

Things here move slowly and it took almost 45 minutes from the time we arrived for us to finally be allowed to set up to minister. Although there were 1400 men at this prison, they took us to a med. size room where I was only able to speak to about 450, but the power of the Holy Spirit was at work again in the hearts of the men as we watched them respond to every invitation.

Then it was time for us to find a place to stay and there is not much available in this town. We found a place BUT there is no hot water, no Wifi, no screen on the windows so there is no air to circulate after dark. Windows cannot be open after dark due to mosquitos and I am cautious of those little female critters after getting Malaria last year.

But the door locks, I have a bed AND a working toilet, they don’t have a menu but have agreed to cook us something ???? so I am a happy camper.

We have no idea where tomorrow’s prison is and there are no addresses or road signs so we are going to be on an exciting journey.

Thank you investing in the lives of the men and women here. Please continue to pray for us.

That none would be lost,
Arlene
Posted by Arlene at 10:30 AM