Oh my what a day!
Aaron was doubly careful today in checking the engine for water, oil and kitties, so thankful he found none.

I was up at 5:15 and we left early as we wanted to try and do ministry in two small prisons. It was about a 2 hr. drive to the first small prison of 128 and 13 of those were women. Once again the men were in the sun and they wanted me on the entrance to the sleeping area that was covered. It's really unbelievable hot the direct sun is here and I wanted them to be able to listen so I told Aaron to asked the Deputy O.C. to please have the me sit in the porch and I would stand in the sun. I found my sunscreen so covered my nose and arms but forgetting my back and front neck area. The women were seated in the shade along side the building Of course I am a "bit" red there tonight.

Watching the Holy Spirit work is so amazing as they made salvation and forgiveness decisions followed by asking each other for forgiveness. They are learning to make good choices for their lives. I handed out donated headscarves to the ladies and they seemed happy with the small gift as they put them right on. I also asked the Deputy O.C. to see to it that the women got a bible and booklet set and he assured me he would. We could not hand out bibles to everyone as there were not enough.

Before we left one of the women wanted to share, she said the she had grown up in a Christian home but had taken up with a M_____and adopted his religion but today she knew what she heard was the truth and she had accepted Christ as her Savior.

Yesterday we stopped by a store to purchase water and i also purchased a Cinnamon Roll for us to share so I set it wrapper in the front window of the van as we drove so quickly it was toasty warm. The three of us ate it two different times. It was long like a loaf of French bread and the sliced across, a very different taste that the ones in America! 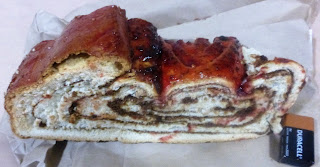 The 9V. battery is just for size comparison

Then it was off to the second prison an little over an hour away. Oh was I ever thankful when the O.C. took me to the area where the 129 men were seated and I saw that the men were pretty much in the shade and the place I would spek from was also in the shade, thank you Jesus!
This prison had no electricity so my headset would not work but with so few men I didn't really need it. Again the prisoners made three good choices for themselves with two of the prisoners going to the O.C. and asking him to forgive them.

As we left for home the sky got black and there was lightning and a downpour. Perhaps tomorrow i will get a picture of what the dirt roads looked like on the way home.

After dinner a conference call with Alfred to go over events of the day and details for the days ahead, a shower and bed by 10:30. Tomorrow is another early morning drive the another prison.

We need your continuing prayers for:

That none would be lost,
Arlene
Posted by Arlene at 10:44 AM