It's been another long day today although we were staying in Lira and our first prison today was at local prison. It was nice to not a long drive first thing in the morning and to get an early 9am start.

When we arrived we were taken to the O.C.'s office where we found her having her breakfast. Although the guard at the gate had refused to let me take my camera with my the O.C. agreed to have a photo taken with me. It is wonderful that God has granted us such favor with the Commissioner and Deputy Commissioner of Prisons that we carry a special letter stating we have permission to take 2-3 photos, an unheard of thing within the prisons.
The O.C. gave us a small room and everyone fit and it was great that I did not have to stand in the sun. Since Aaron does not speak Lou God provided a nice lady from the staff who did a great job. There were responses for salvation, forgiveness and the women forgave each other. One woman stated that her mother forced her to murder her child but today she forgave her mother and herself. As she told us of her decision she wept and my feet could not move fast enough as I went to her side and put my arm around her. She said she had been in prison 23 years and had vowed to never forgive her mother but today.....but today.....but today, she found forgiveness from Jesus and in turn forgave! Again the Holy Spirit's work was evident.

The nine women with babies were ever so pleased that they were able to choose a darling donated crochet cap for their child. The women also gave me another Ugandan name which means "one who brings good news." So when added to my other two Ugandan names, Victorious and Gift the Ugandans call me, "The Victorious Gift who brings Good News." I'll take it!!!!

Before leaving they brought a old women back that they had earlier removed, she was beating her chest , crying and hollering. The lady that translated for me said she was demon possessed, she and Aaron and I prayed for her but the lady told me she was a christian. I was concerned that she only had religious head knowledge because the Holy Spirit with not share his home with demons. It was evident that she was demon oppressed at the very least. I could not get her to call on the name of Jesus before we left. They said she had murdered her child years before and it was the spirit of the dead child that was tormenting her.

When we finished we went to the gate and I retrieved my camera and then turned to go to the O.C.'s office for our photo when the gate keeper tried to stop me and grab my phone. I told her I forgave her for being so rude and continued walking to the O.C.'s office. I entered and asked the O.C. for our photo which she graciously said yes too, telling the guard that she gave permission.

Then it was an hour drive to our second prison and we passed an interesting "field" where Aaron said they were growing fish called....Mud fish. 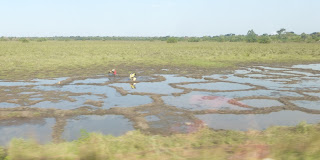 Well, I like Tilapia from Lake Victoria but I think I will pass on Mud Fish.

Our second prison today had a small women's section which they brought in so I could talk to all of them. Most of the men prisoners were so young even the man who translated for me. He was quite good and fast only stopping a few times to clarify what I said. During the forgiveness part many were wiping their eyes and as my interrupter started to cry he abruptly left so no one would see him. He came back later and told me he would get out in less than a year.

As I finished I was told the women had a song for me as a thank you and so they did, they sang about IRM and included singing thanks to Aaron and me!

Aaron decided to drive the hour to  the town of Soroti for us to find a place to stay, that way we will already be in the same town as our next prison.


Every day is an adventure for sure. Thank you for partnering with us, your prayers are working.
"Thank You"