It was a beautiful morning in Kericho, Kenya.

A friend, Kathy, posted this comment on yesterday's blog:
Acts 13:47 "For the Lord gave us this command when He said,"I have made you a light to the Gentiles, to bring salvation to the farthest corners of the earth." When the Gentiles heard this, they were very glad and thanked the Lord for His message; and all who were chosen for eternal life became believers. So the Lord's message spread throughout that region."
You are in the company of the Apostle Paul these days as you bring the salvation message to the farthest corners of the earth!"

Thanks for such a powerful reminder of our mission and calling.

After a great buffet breakfast ( Spanish omelet with cheese, potato rounds, beans, sausages, corn  on the cob, toast, pineapple, honeydew melon, strawberry yogurt and African tea and there was so much more that I did not eat!) we off the short distance to the first of two prisons today.

Although we follow pretty much the same program at each crusade the outpouring of the Holy Spirit often differs from prison to prison. I am firmly convinced that regardless of what I say the inmates hear just what they need to hear for their personal situations. There were numerous interruptions today as  new incoming prisoners entered right behind me. But the men made good decisions for their lives today and at the end ....... 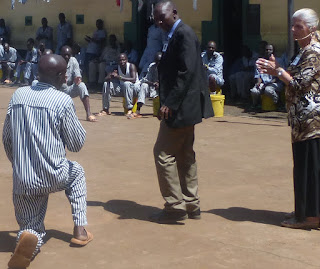 one prisoner came and bowed down, He said he had had disagreements with many of the inmates and he apologized and asked then to forgive him and for those who had done him wrong he said he forgave them.

Then one of the guards, who had sat through the entire crusade, came and insisted I pray for him. When I asked what for he responded that he wanted to receive Jesus as his Savior and then he knelt down in front of me with Aaron and the prison chaplain standing with me. 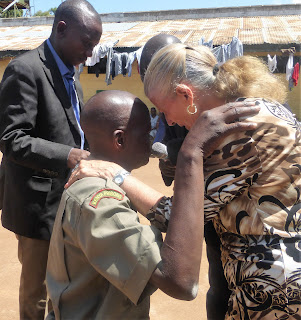 As I leaned over him I could smell the alcohol on his breath but I led him in prayer and all of the prisoners and guards heard his confession of faith as Aaron held a microphone before him. Following his prayer the prison erupted in cheering and applause. He told Aaron that God rescued him today and that from today he would never have another drink.


It was then was time to go to the women's prison where we met the woman chaplain. I could hear the women's beautiful voices as we arrived and as we entered the building I saw that changes needed to be made. Two third of the 140 women were on one side of a partial wall with the rest on the other side. I decided the best way to do the teaching was to stand in the doorway between the two rooms. Like the men today, the women made good choices for themselves. As we concluded one woman came weeping and said she had told many other prisoners of her plan on killing her husband when she got out because she was innocent and it was his fault she was there. She said she had sent him a letter telling him so. She saw him in court and although he asked for forgiveness she told him she was going to hire thugs to kill him and the others who helped him. 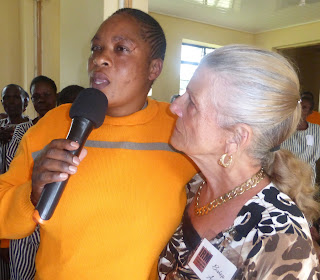 BUT TODAY with tears streaming down her face she made the decision for her heart to be free and she had prayed forgiveness over him.


I HAVE NO FURTHER WORDS, JUST PRAISE TO THE PRECIOUS SAVIOR!

That none would be lost,
Arlene
Posted by Arlene at 8:18 AM