It was an early morning as we must be all packed and loaded in the van before breakfast at 8 which we ordered for 7:30 and was ready at 8:30.

While we were having breakfast Pastor Aaron stated how he had translated for me and also heard me share when Alfred interpreted the message on forgiving. He said he kept having a prick in his heart over all the years we have worked together but last night he knew he had to forgive his father which he did. When I pray that everyone’s heart would be touched during our ministry time every day or evening I usually never get to hear exactly how the Holy Spirit is working in each life. I thanked Aaron for sharing something so personal with us. Praise the Lord.

We were ready and standing by the van waiting for Ben to arrive which he did at about 9 but he then told us that the Regional Commandant of Prisons named Rev. Moses Mbito, God’s blessing upon us to have him with us, talk about open doors!

Rev. Moses said on the phone to Ben that he is coming but it is now almost 10:30 and we are still waiting.  Finally he arrived and he had a tall man named, Rev. Edward Langeil with him. I really liked them both although Moses was rather formal and stiff, very much the boss. They had said the prison was close but I guess that is relative as it was a distance. 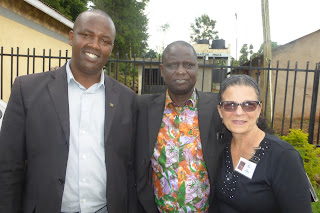 Rev. Edward, Rev. Moses and Arlene
When we arrived at Kapenguria Prison we first passed a church only to find out Anglican had built it. They said we could take photos so that was a blessing for sure. The prisoners were having lunch so we walked to the church we had passed as Moses told us all about its history.

Then it was time to head in to the prison and there they were in their street cloths and stripped black & white prison garb but they had the same hopeless and forgotten look about them. We followed the same format and watched so very many respond.

They were thankful or the Bible sets, soap and the women for their donated scarves.
As we were finishing one of the men prisoners came with a beaded bracelet that the wanted to give me as a “Thank You”. It’s beautiful and delicate made with tiny glass beads the color of the Kenyan flag and symbol. What a treasured gift from my first prison in Kenya.

Before leaving the prison area we were invited back to the church for a meal and then we departed with 4 more people in the van that needed a ride.

I am thankful that the Lord held the rain back while we were at the prison but it rained for the next 6 hours that it took us to drive to a town to catch the plane in the morning for Nairobi. We had been told that the drive would only take 2 ½ hours but it was farther than expected and the road was more than horrible. Aaron and Alfred did a great job, in the dark and rain, of getting us finally there at 11pm through muddy, rutted, crevice filled, pothole, and pavement missing roads.

As we drove into the night and through the darkness I was so very thankful that we did not have a flat tire of break down. I just couldn’t help it; with my bad back that long rough ride had every nerve in my sore body screaming by the time we got to a hotel for a few hours rest.

Alfred said we need to leave for the airport by 6 for our early flight to Nairobi at 7:30.
So it’s good night for today.
That none would be lost,
Arlene
Posted by Arlene at 4:43 AM