As I awoke this morning I decided to log on to see if I had any fb messages as I was getting ready and there was a message from Rev. Edward Kemei from Kenya. We chatted a bit and then he sent me some photos from the day we were at Kapenguria Prison with him and he gave his permission for me to post them on fb. 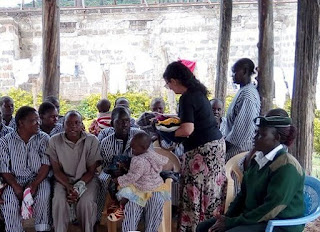 Arlene distributes donated scarves to the women prisoners of Kapenguria Prison
Today was our 12th Ugandan prison and we had been told to be there at 10 as they have their meal at 12:30. It is so different here than in Rwanda where they have a mixture for breakfast and then have dinner at night. Pastor Geoffrey met us there.

They didn’t bring the 12 women prisoners  in for some time but I was concerned about not having enough time so I went ahead and started after the men has sung some worship songs led by our guys. Alfred and Aaron do a great job leading worship.  The men were mostly squeezed together under a covered porch in front of their quarters and the women were seated to the side under a tree for shade.

I could have also been a distance from them under a tree for shade but I chose to be close in front of the men in the sun as did Alfred and Aaron who were translating at different times for me. We followed the same format after I started but due to the shortened time instead of sharing about the fear the nation of Israel dealt with I shared about King Uzziah and his fear of what people would think.

After the response for salvation and for forgiveness the team had the great joy of having enough and distributing Bibles and Discipleship Booklets to each person present. I then told them about the blankets we had also brought and then I kissed each women on the cheek as I gave her a beautiful donated scarf.

The prisoners clapped and showed such excitement, as they always do, when I told them that Americans were praying for them and that they had not been forgotten. They thanked us and asked us to return again and again. I told them if I returned I did not want to see them there but I would see them outside. At that they erupted with applause and hollering.

As we left the prison we could only offer God praise for how we watched the Holy Spirit work. It began to rain as we drove away and I commented again to Aaron about the fact that God had held back the rain again until after we had finished ministering. God’s faithfulness is so evident so many times during every day.

We stopped on the way back to our hotel at a guest house to see what they had to offer for possible future ministry trips. Arriving back at our hotel, Alfred started working on the Uganda Government Report he writes and I sort photos for him to use. I must confess I have the easiest part. Aaron headed into town to take care of a personal errand.

Imagine me trying to explain to the young man at the Reception Desk that I needed a Phillips screwdriver! One of the rollers got broken off of our sound system and I wanted to take off the remaining one and bring it back to America with me so I could find a replacement sent, if possible, to bring back and put on next year. It’s much easier to roll than carry as it is quit heavy and bulky. He only had a small ended regular one but I was able to make it work.

At 5:30 (really early for eating here) Alfred ordered dinner for us and it was ready at 6. But it was an interesting discussion that took place over the hamburger I ordered. I ordered one last year and it was ……….! I questioned the cook who came to discuss what I wanted and I found s few things interesting but some I had already figured out items like Fish burger and Chicken burger  but the regular burger came with a cooked egg on top and the Cheese burger was the best …… it was exactly what it said, a burger made with cheese, NO meat!

I ordered the regular burger but with NO egg then substituted cheese for the egg. Instead of having it with all chips I had them bring it with ½ fries and ½ French beans. It was pretty good as I also had lettuce, onion and tomato added. I caught a glimpse of the cook as I was eating and I motioned her over and told her my burger was good and thanked her for seeing to all my details.

It is hard to believe that it is only 8pm and I have this post about ready for the blog. It then will be time to get ready for bed. I am trying not to but only 3 more days and this trip will be over as I fly out for America, my first home as Africa has become my second. It is not only a blessing just to be here to do ministry but to be able to do it with those God has put in my life as family.

Have a blessed day partners.
That none would be lost,
Arlene