It was nice this morning having the prisons so close. We met with the O.C. of the men's area and I really liked him. He, like the one O.C. in Uganda has a good vision for helping the inmates improve their lives. He said he could not be with us as he needed to attend a funeral.
He has a program called "Therapeutic Community" for 40 select men and he asked me to speak to them for just 10 min. or so before the crusade as he felt my program/thoughts would just fit in to what they are studying and learning. Those kind of impromptu speaking times are a bit difficult for me as I like time to study, get scripture and pray over what I  will say. But the Holy spirit was good to me and gave me a bit to say to them.

Then we went into the main part of the men's section of about 900. This was a max. security prison so there were murders and lifers there. I am so drawn to the hopelessness on their faces and yet there is that spark they they hare expecting something that will speak especially to them. I was thankful that there was a nice cover where they were and where I would speak from.

There was one women staff there and she was taking video of me. I must say I am not comfortable with that, I would not care if they took 4,000 photos but taking the videos makes me uncomfortable. I spoke with Edward about it, I will have to see what can be done in the future.

The Holy Spirit was powerful among those men today for salvation, forgiveness and apologizing.
Testimonies were:
We finished and walked over to a small prison church where the lady chaplain, tall and thin, had food prepared for us. Hard boiled eggs, deep fried yeast bread triangles, peanuts, bread sandwiches with butter or jelly, bananas and African tea. I was still eating carefully after being so sick last night and eating only bread and African tea for breakfast.

Finally, it was off to the women's side of the prison facility where there were 130 women. We met with the Deputy O.C. who I also really liked. It was so much fun to see the women singing and dancing a dance style I had never seen before and of course I could not help but get in line with then and dance. Some of the guards and the Deputy O.C. also danced with us.

I was so pleased that about 12 or so guards sat against a wall behind the women who were in front of me and others sat behind me. We were outside in a central courtyard with no cover but God provided a cloud cover for us. Bishop Moses said that some of the guards said they did not believe I was 75 to dance and stand and preach for the time I did.

Our crusade went well and many decisions were made of each kind and touching testimonies followed:
When we finished I had all the women with babies, 15 of them, come and sit in the front row and I gave them the darling hand crochet caps made by Canby Foursquare women and then I handed out to each lady a donated scarf. They put some scarves on, others inmates were waving them while some came forward and started dancing again while everyone sang. WHAT FUN! 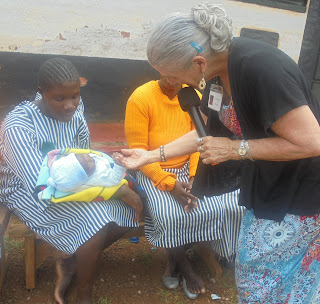 What a precious baby!

We got back to our hotel and I started doing some book work when I discovered that I got so sick last night because of the rancid oil they were heating hot to cook with. I am next to the kitchen and I started to get sick again tonight and realized what it was, such a putrid smell. I am OK and we went to eat somewhere else for dinner tonight.

We have had a change of plans and will go to the Med. Security Prison here before leaving tomorrow It's hard to imagine that I only have 2 more crusades to do and our mission trip will be ending.

Just a fact that you probably don't care about, toilet in Swahili is Choo!

That none would be lost,
Arlene
Posted by Arlene at 10:31 AM